– The Canadian Baseball Hall of Fame announced on Friday that they will be postponing their 2020 induction ceremony until June 19, 2021. With the uncertainty surrounding the COVID-19 pandemic and the Ontario government’s regulations on crowd sizes, they really had no other choice. So Canadian baseball fans will have to wait until next year to travel to St. Marys, Ont., to see former Minnesota Twins slugger Justin Morneau (New Westminster, B.C.), ex-Toronto Blue Jays all-stars John Olerud and Duane Ward, and legendary Montreal Expos broadcaster Jacques Doucet (Montreal, Que.) be inducted.

– As part of the same news release, the Canadian ball shrine announced that Jeremy Diamond will be taking over as the chair of their board of directors. Jeremy is currently the CEO of Myseum of Toronto. “Jeremy is an accomplished leader with more than 20 years of experience in fundraising, program development and communications,” said Adam Stephens, the board’s outgoing chair. “He is a visionary with an outstanding track record of delivering quality initiatives and building strong relationships with partners and stakeholders. His personal passion for the sport of baseball and Canada makes him the perfect choice to lead the Board.” I can tell you from my interactions with Jeremy that he is hardworking, passionate, charismatic and an all-around wonderful guy. He’ll be great in this new role. 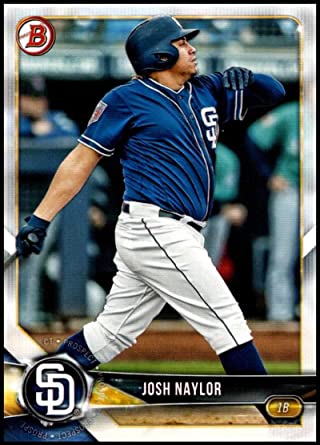 – The Canadian major leaguer who’s most likely to benefit from MLB’s “universal DH” this season is San Diego Padres young slugger Josh Naylor. The Ontario Blue Jays and Junior National Team alum and Mississauga, Ont., native, who has put up strong offensive numbers at every minor league level since being selected in the first round of the 2015 MLB draft,  batted .249 with eight home runs in his first 94 games of MLB action last season. But Naylor is a first baseman/outfielder and with the Padres, he’s unlikely to see much time at first base with Eric Hosmer there and he was also going to be in a battle for playing time in the outfield with veterans Wil Myers and Tommy Pham and youngsters Trent Grisham and Frenchy Cordero all vying for regular work.

– Happy 47th Birthday to Canadian Baseball Hall of Fame inductee and longtime Minnesota Twins third baseman Corey Koskie. Born in Anola, Man., Koskie was a multi-sport star in high school, excelling in baseball, hockey and volleyball. After choosing to focus on baseball, he honed his skills at the National Baseball Institute in Surrey, B.C., in 1993 before he was selected in the 26th round of the 1994 MLB draft by the Twins. The 6-foot-3 slugger became a regular with the Twins in 1999 when he hit .310 and belted 11 home runs in 117 games. But his true breakout season would come two years later, when he scored 100 runs, socked 26 homers, collected 103 RBIs and swiped 27 bases to become the first third baseman in American League history to record at least 100 runs, 25 homers, 100 RBIs and 25 stolen bases in the same season. For his efforts, he was named co-winner (with Larry Walker) of the Canadian Baseball Hall of Fame’s Tip O’Neill Award. In the ensuing three campaigns, he never hit less than 14 home runs in a season and he helped the Twins to three consecutive playoff berths. On December 14, 2004, he signed with the Blue Jays and would slam 11 homers in 97 contests for the Canadian club in 2005, prior to being swapped to the Milwaukee Brewers in January 2006. In all, in nine big league seasons, Koskie suited up for 989 games – more than any other player from Manitoba – and ranks eighth all-time among Canadians in home runs (124) and slugging percentage (.458). For his efforts, he was elected to the Canadian Baseball Hall of Fame in 2015.

– It was 22 years ago today that Canadian Baseball Hall of Fame inductee Ryan Dempster (Gibsons, B.C.) secured his first major league win. The then 21-year-old right-hander allowed just one run and four hits and struck out six in seven innings for the Florida Marlins in their 5-1 win over the Boston Red Sox at Pro Player Stadium. Dempster would finish his major league career with 132 wins – the second-most by a Canadian to Fergie Jenkins (Chatham, Ont.) who registered 284 victories.

– Happy 56th Birthday to Kevin Reimer! Though he was born in Macon, Ga., while his father, Gerry, was playing for the double-A Macon Peaches in the Cincinnati Reds’ organization, the younger Reimer grew up in Enderby, B.C. The left-handed hitting slugger was part of the Canadian national team on multiple occasions, including at the 1983 Pan Am Games and 1984 Olympics before he went on to enjoy a solid six-year big league career with the Texas Rangers and Milwaukee Brewers that saw him hit .258 with 52 home runs in 488 games.

– It makes sense that when 22-year-old Atlanta Braves right-hander Mike Soroka was growing up in Calgary, Alta., that he was a fan of Jarome Iginla and the Calgary Flames. After Iginla was elected to the Hockey Hall of Fame on Wednesday, Soroka posted this great image (below) of him meeting Iginla and Cassie Campbell as a kid. 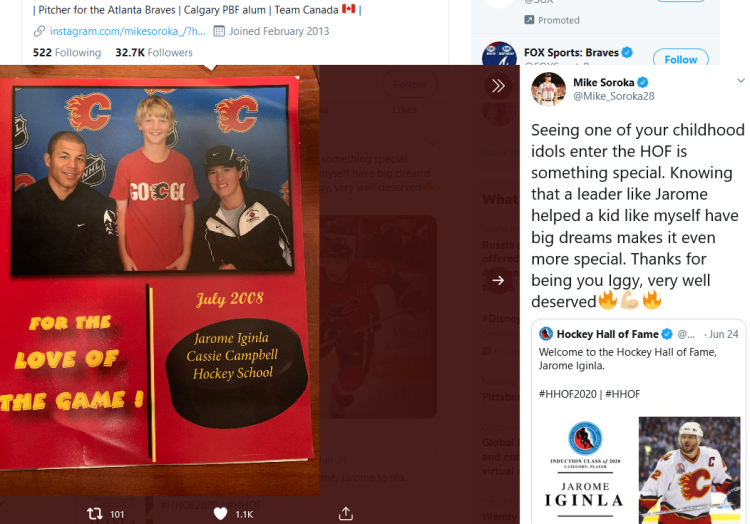 – I had the opportunity to interview former Toronto Blue Jays reliever Bob File last week.  It was fascinating to talk to him about his upbringing, his college years as a hard-hitting third baseman, his hard work to become an effective reliever in pro baseball and his post-baseball life as a pharmaceutical tech wizard and new father. You can read the full article here. One thing that I couldn’t fit into the article was File’s praise for Canadian Baseball Hall of Fame inductee and former Blue Jays teammate Paul Quantrill (Port Hope, Ont.) who served as a mentor for him. “I had met him when I was playing double-A and I was coming over to spring training and I had pitched in a couple of big league games. I remember Paul would come over and just spend time with me and just talk with me. And at the time, I was just a minor league, double-A guy and I thought the world of these guys. And Paul always treated me like a person, not like a minor league player.” File also remembers watching Quantrill pitch. “He had the best control. He could hit a fly on the wall. He was unbelievable. He could throw the ball anywhere he wanted to and he never walked anybody. He really helped me in terms of just talking in the bullpen every day. We would just talk about hitters because he knew hitters and we both had to pitch with a cerebral approach. He was a big part of my development.”

– Please take a moment to remember former big league pitcher Mike Kilkenny who passed away two years ago today at the age of 73. Born in Bradford, Ont., Kilkenny was an unlikely major leaguer. His high school didn’t have a baseball team and he grew up at a time when Canadians were not eligible for the major league draft. But the talented left-hander would make a name for himself as a 15-year-old in the Toronto area when he began overpowering players that were as many as six years older than him. His performance attracted the interest of big league scouts who paid scant attention to Canadians during that era. According to Kilkenny’s SABR bio,  19 of 20 major league teams made contract offers to him before he opted to sign with the Detroit Tigers in 1964.  The Canuck southpaw would toe the rubber for parts of five seasons in the Tigers’ minor league system before winning a spot on the big league staff out of spring training in 1969. That season proved to be his best in the majors. In all, he’d compete in 39 games and make 15 starts, and by the end of that campaign, he was one of the Tigers’ top starters, hurling four complete-game shutouts in his final nine appearances.  He finished that season with an 8-6 record and a 3.37 ERA. Kilkenny served as a swingman for the Tigers for the next four seasons before he was dealt to the Oakland A’s on May 9, 1972. Eight days later – after making just one appearance for the A’s – he was swapped to the San Diego Padres who used him in five contests before flipping him to the Cleveland Indians. In just over a month, Kilkenny pitched for four different teams. The versatile Canadian regained his form in Cleveland, posting a 3.41 ERA in 22 games and he took the mound for five games with the Tribe in 1973 before walking away from the professional ranks. Kilkenny then returned to Canada to manage the pro shop of the Llyndinshire Golf Club near London, Ont. In 1975, he agreed to pitch for the Intercounty Baseball League’s London Majors and proceeded to register a 9-0 record and a 2.31 ERA to lead the Majors to their last league title.

– This week’s trivia question: As noted earlier, Corey Koskie, who was born in Anola, Man., was elected to the Canadian Baseball Hall of Fame in 2015. Who is the only other Manitoba-born major league player that has been inducted into the Canadian Baseball Hall of Fame? Please provide your answer in the “Comments” section below. Please note: I’m going to hold off awarding prizes until after the COVID-19 pandemic. Hope you understand.

– The answer to last week’s trivia question (There have been two Canadian father/son tandems that have played in the big leagues. Can you name them? ) was Cody and Dave McKay (Vancouver, B.C.) and Paul and Cal Quantrill (Port Hope, Ont.).