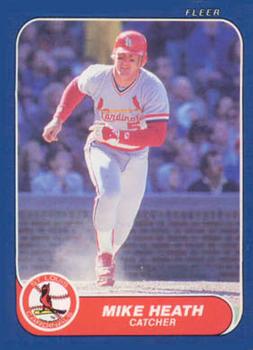 This is the seventh of my “Find the Canadian Connection” features.  For this feature, I close my eyes and reach into a random box of baseball cards in my basement and pull out a single card. I then try to establish a Canadian connection for the player featured on the card.

You can read all of the “Find the Canadian Connection” features here.

In 1,325 major league games, the 5-foot-11, 180-pound catcher batted .252 and recorded 1,061 hits – 86 of which were home runs. The right-handed hitting Heath made his major league debut with the 1978 World Series-winning Yankees and primarily served as the backup catcher to Thurman Munson.

His seven seasons with the A’s represented his longest tenure with one club. A rifle-armed catcher, Heath could also contribute with the bat. His finest campaign with the A’s was 1985 when he hit .250 and clubbed 13 home runs and six triples in 138 contests.

Though the card I pulled for this article showcases Heath with the Cardinals, he suited up for just 65 games with them in 1986 before he was dealt to the Tigers for right-hander Ken Hill (yes, the future Montreal Expos ace) on August 10.

Heath seemed to get a second wind in Motown and helped lead the club to an unlikely American League East title in 1987 when the Tigers swept the Toronto Blue Jays at Tiger Stadium in the season’s final series to advance to the playoffs. That year, Heath set career-highs in batting average (.281), on-base percentage (.339) and slugging percentage (.430).

He would play parts of three more seasons with the Tigers before finishing his career with half a season with the Braves in 1991.

On top of being a strong-armed catcher, Heath played at least one game at every other position except pitcher during his big league career. Tigers manager Sparky Anderson, for one, savoured Heath’s versatility.

“You had a guy who was versatile, but I fit into how Sparky wanted to run things with the Tigers,” Heath told Michigan Live in an interview in 2015. “I loved playing for the Tigers; it was a great time in my life. Sparky was phenomenal. I got to play under Billy Martin (in New York), Bobby Cox (in Atlanta) and Sparky. So I was pretty fortunate because Sparky was the type of manager I needed at that point in my career – he was great to talk to.”

After he hung up his playing spikes, Heath worked as a manager in the Chicago White Sox organization for a year and a half before walking away from the game.

According to this 2015 Michigan Live article, Heath still lives in the Tampa, Fla., area and has developed an interest in motorcycles and spends much of his time travelling the country with his wife on their Harley Davidsons.

I found a few Canadian connections for Heath:

– Heath was a teammate of Vancouver native and Canadian Baseball Hall of Fame inductee Dave McKay on the Oakland A’s from 1980 to 1982.

– Heath had his only five-hit, big league game against the Blue Jays at SkyDome on June 12, 1989. All five of his hits were singles. He also had two RBIs. Kelly Gruber countered with five hits for the Blue Jays to help them to a 5-4, 11-inning win.

– His only big league home run in Toronto came on June 29, 1984 at Exhibition Stadium when he walked to the plate for the A’s and belted a solo shot off Blue Jays’ ace Dave Stieb in the fifth inning to tie the game. The A’s eventually won 2-1, handing Stieb another of his many hard-luck losses.

– Heath also hit one home run in Montreal. On April 18, 1986, during his short tenure with the Cardinals, he clubbed a two-run blast off Expos lefty Joe Hesketh in the top of the sixth inning. Canadian Baseball Hall of Fame inductee Andre Dawson homered for the Expos in the same contest. The Cardinals won 4-2.

– Heath did not fare well against Canadian pitchers, going a combined 2-for-22. Here is the breakdown: 1-for-5 vs. Fergie Jenkins (Chatham, Ont.), 1-for-8 vs. Kirk McCaskill (Kapuskasing, Ont.), 0-for-8 vs. Reggie Cleveland (Swift Current, Sask.) and 0-for-1 vs John Hiller (Toronto, Ont.). All four of these hurlers have been inducted into the Canadian Baseball Hall of Fame.