·         “I’m not thinking about baseball right now, if I’m honest. I’m just trying to take it moment by moment and look after the people closest to me.” That’s what  Joey Votto (Etobicoke, Ont.) told Sridhar Pappu for the excellent article called “The Brainiest Hitter” that Pappu wrote about the Canadian slugger for the May 2020 issue of The Atlantic. Votto has returned to Toronto to wait out the COVID-19 pandemic. Pappu’s article focuses on Votto’s intelligent and unorthodox approach to hitting. “You want to look sexy up there,” Votto tells Pappu at one point. “You see the very best guys in the game have this swagger, hitting taller, with flashy, finishing moments. My style comes across like, ‘Oh, he’s really working hard.’ ” It’s a fascinating article; you can read it here.

·         One Canadian player who has remained south during the COVID-19 pandemic is right-hander Jordan Romano (Markham, Ont.). We know this thanks to Canadian Baseball Network contributing photographer Eddie Michels who snapped a photo of the soon-to-be 27-year-old hurler while he was out for a walk in Dunedin, Fla. Romano told Michels that he didn’t feel safe traveling through the airports, so he stayed in Florida. The hard-throwing Romano was one of the most impressive relievers in Blue Jays camp this spring. The 6-foot-4 right-hander employed a fastball that has clocked as high as 98 mph and a nasty slider to strike out six batters in five scoreless innings. Romano, who fanned 21 batters in 15 2/3 innings in 17 appearances in his first taste of major league action last season, will be one of the leading contenders for a spot in the Blue Jays’ bullpen when (or if) the MLB resumes play this year.

·         Fortunately for Canadian baseball history buffs like myself, Canadian Baseball Hall of Fame inductee Fergie Jenkins (Chatham, Ont.) is very active on Twitter and often shares great photos and memories from his career. This week he posted a photo of the official document that confirmed his player contract (photo below) had been traded from the Philadelphia Phillies to the Chicago Cubs. The document is dated April 21, 1966. The deal would go down as one of the worst trades in Phillies’ history. Starting in 1967, Jenkins had six consecutive 20-win seasons for the Cubs.

·         Former Canadian Baseball Network writer and fellow London, Ont., native Alexis Brudnicki is, as always, doing outstanding work during the MLB break due to the COVID-19 pandemic. Now employed by MLB.com, she is writing profiles about some of our country’s legendary scouts. This week her story about veteran Minnesota Twins scout Walt Burrows (Brentwood Bay, B.C.) was published, while last week, her excellent article about Philadelphia Phillies talent evaluator Alex Agostino (Montreal, Que.) ran. Both of these men have done tremendous amount of work to help young Canadian players over the years and I’m glad that Alexis is giving them their day in the sun.

·         Former Toronto Blue Jays second baseman Damaso Garcia passed away on Wednesday at the age of 63 (or 65 according to his son’s tribute video). Garcia had been in failing health for many years. You can read a full obituary of him here. His son, Damaso Garcia, Jr., posted a touching video tribute (Click on the link below to watch it) to his father on Twitter on Thursday. Most remember Garcia as the leadoff hitter for the Toronto Blue Jays from 1980 to 1986, but he spent his final major league season with the Expos in 1989. One scene in his son’s video tribute had Garcia coming out of the dugout at Montreal’s Olympic Stadium for a curtain call. This made me curious as to when and why Garcia received this ovation at The Big O. I did some research and this curtain call must have come after Garcia clubbed a walk-off, two-run home run off Cincinnati Reds closer John Franco in the bottom of the ninth on July 22, 1989. The Expos came into that inning trailing 5-1 and eventually won 6-5 on Garcia’s two-run blast.

To all who enjoyed, cried and prayed for him, today we say THANK YOU. pic.twitter.com/nVfnlwH74Y

·         One player who would’ve formed a double-play combination with Garcia on that 1989 Expos squad was shortstop Spike Owen. The switch-hitting Owen was one of my favourite players when I was growing up. He began his career with the Seattle Mariners and when I was 12, I wrote him a fan letter and mailed it to the Kingdome. He responded with this autographed postcard (below). It was the first major league autograph I ever received and I still cherish it. Owen turns 59 today. Happy Birthday to him! 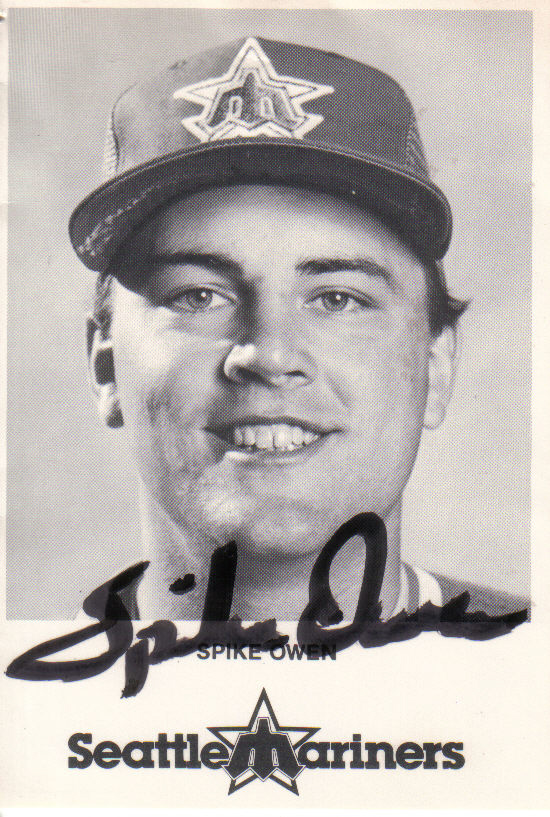 ·         A few years ago, someone sent me this photo (below) of what they said was a young Ken Griffey Jr. wearing a Montreal Expos cap. Well, thanks to the detective work of Canadian Baseball Hall of Fame director of operations Scott Crawford and Seattle Mariners media relations contact Ian Kraft, it has been confirmed that this is, in fact, Ken Griffey Jr., in the photo. Kraft reached out to Griffey Jr., himself, who confirmed the photo was of him. Griffey’s father, who recently turned 70, played part of 1971 and the entire 1972 season with the Cincinnati Reds’ double-A Trois-Rivieres Aigles in Quebec. So the Expos hat was likely secured during that era.

·         This week’s trivia question: I mentioned earlier that Jose Cruz Jr. was the second Blue Jays player to record 30 home runs and 30 stolen bases in a season. Who was the first? Please provide your answer in the “Comments” section below. Please note: I’m going to hold off awarding prizes until after the COVID-19 epidemic. Hope you understand.

·         The answer to last week’s trivia question (Expos right-hander Carl Morton won the National League Rookie of the Year Award in 1970. Who is the only other Expos player to win the award?) was Andre Dawson in 1977.

19 thoughts on “But What Do I Know? . . . Joey Votto, Jordan Romano, Fergie Jenkins, Damaso Garcia”