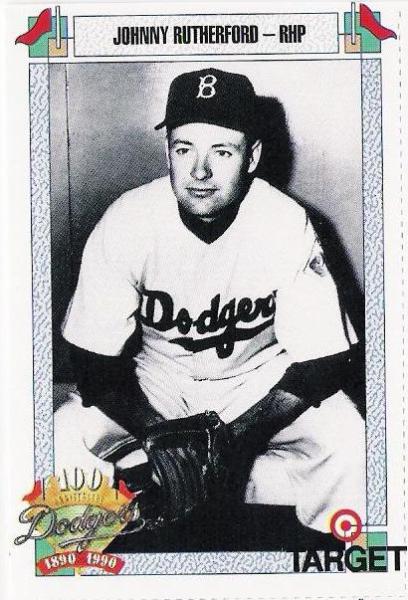 ·         In case you were wondering, the first Canadian to pitch in the major league post-season was Belleville, Ont., native Johnny Rutherford. The Canuck right-hander hurled an inning in relief for the Brooklyn Dodgers’ in their 2-0 loss to the New York Yankees in Game 4 of the 1952 World Series. And talk about baptism by fire. The first batter Rutherford faced was Mickey Mantle who promptly drilled a triple to deep centre field and then scored when Pee Wee Reese threw the ball wildly trying to gun him down at third base. Rutherford then walked Hall of Famer Johnny Mize, before settling down to retire Yogi Berra, Gene Woodling and Hank Bauer.

·         Longueuil, Que., native Abraham Toro is not on the Houston Astros’ American League Division Series roster. The switch-hitting Canadian, who batted .218 with two home runs in 25 games for the Astros and served as a valuable infielder down the stretch for the club, was left off the roster when Astros shortstop Carlos Correa, who missed the final week of the season due to back stiffness, declared himself ready to play. In other Toro news, the young Canadian slugger has donated the cap he wore in his MLB debut to the Canadian Baseball Hall of Fame in St. Marys, Ont.

·         There’s a large contingent of Cincinnati Reds fans on Twitter that have consistently contended that Canadian Joey Votto (Etobicoke, Ont.) is not worth the $25-million per season salary their club is paying him. Perhaps this graphic (click on link below) will finally silence them. In the past decade, Votto is first among major leaguers in walks and on-base percentage and is second in OPS and batting average and third in doubles.

For all the Votto haters 🤷‍♂️🐐 pic.twitter.com/ab387LYKbg

·         Happy 34th Birthday to ex-big leaguer, Baseball Canada alum and North Battleford, Sask., native Andrew Albers! He just completed his second season with the Orix Buffaloes of the Japan Pacific League. On top of his successful tenure in Japan, Albers has posted a 4.10 ERA in 26 appearances in parts of four major league seasons with the Minnesota Twins, Toronto Blue Jays and Seattle Mariners. He was also a member of the Canadian Senior National Teams that won gold at the Pan Am Games in 2011 and 2015.

·         It’s hard to believe it was nine years ago that Canadian Baseball Hall of Famer and then Philadelphia Phillies ace Roy Halladay tossed a no-hitter against Votto and the Cincinnati Reds in Game 1 of the National League Division Series in his first MLB post-season start. He walked one batter and struck out eight, including Scott Rolen three times, in the masterpiece. That performance made him just the second big leaguer to hurl a no-hitter in the playoffs. Don Larsen, who tossed a perfect game for the Yankees against the Dodgers in Game 5 of the 1956 World Series, was the first.

·         I know he’s in the midst of coaching first base for the Cardinals in the National League Division Series, but Windsor, Ont., native Stubby Clapp should be a sought-after managerial candidate this off-season. With the New York Mets firing Mickey Callaway on Thursday, there are now seven big league managerial openings. The gritty and lovable Clapp is a proven winner. He was a key contributor to the Junior National Team that won gold at the World Youth Baseball Championships in Brandon, Man., in 1991. He was a coach on both of Canada’s Senior National Teams that captured gold at the Pan Am Games (2011, 2015) and he managed the Memphis Redbirds to back-to-back Pacific Coast League championships prior to joining the Cards this season.

·         Speaking of post-season coaches, that’s former Blue Jay Paul Menhart who is the pitching coach for the Washington Nationals. More than any other team, the Nationals have employed an all-in approach with their pitching staff this post-season. Starter Stephen Strasburg hurled three innings in relief for ace Max Scherzer in the Wild-Card game and then Scherzer tossed an inning in relief in Strasburg’s start in Game 2. Menhart posted a 4.92 ERA in 21 appearances for the Blue Jays in 1995.

·         Thirty-four years ago today, 46-year-old knuckleballer Phil Niekro tossed an 8-0 shutout for the Yankees over the Blue Jays at Exhibition Stadium on the final day of the 1985 season to record his 300th career win. With that, the veteran right-hander became the 18th, 300-game winner in MLB history. The Blue Jays had clinched their first division title the day before.

·         Who was the first Blue Jays player to win a major MLB award? That would be Alfredo Griffin who was voted co-winner of the 1979 American League Rookie of the Year Award along with Minnesota Twins second baseman John Castino. Griffin batted .287 and had 179 hits – including 10 triples – and 21 stolen bases in 153 games for the Blue Jays that season. Griffin turns 62 today.

·         Former Canadian Baseball Hall of Fame board member and longtime supporter of the museum David Morneau has organized “An Evening in Space,” an event that will feature colourful former Montreal Expos pitcher Bill Lee in conversation with Jack Graney Award winner Richard Griffin that will take place this Wednesday in Kitchener, Ont. This should be an interesting night. I’ve purchased my ticket. You can purchase tickets to the event here. Part of the proceeds from the tickets will go to the Sexual Assault Centre of Waterloo Region.

·         This week’s trivia question: Aside from Griffin, who is the only other Blue Jays player to win the American League Rookie of the Year Award? The first person to provide the correct answer will win a 1984 Fleer Montreal Expos team set.

·         The answer to last week’s trivia question (Blue Jays rookie Rowdy Tellez had 21 home runs this season. There are three other Blue Jays who have hit 20 home runs in their rookie season. Name two of them.) were any two of Eric Hinske, J.P. Arencibia and Fred McGriff.

13 thoughts on “But What Do I Know? . . . Mike Soroka, Johnny Rutherford, Joey Votto, Andrew Albers”