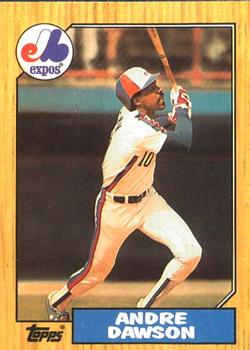 ·         As the MLB amateur draft approaches (June 12 to June 14), it’s important to remember that it’s not just first-round picks that end up in the Hall of Fame. For example, 42 years ago today, the Montreal Expos chose Andre Dawson, out of Florida A&M University, with their 11th round selection (250th overall). The five-tool outfielder was scouted by Bill Adair and received a $2,000 signing bonus and was sent to the Expos’ Rookie League club in Lethbridge, Alta., immediately after the draft, where he hit .330 with 13 home runs in 72 games.

·         And just as an 11th round-pick can evolve into a Hall of Famer, sometimes a can’t-miss first-rounder will never crack the big leagues. Twenty-five years ago Thursday, the Montreal Expos selected 6-foot-4 left-hander B.J. Wallace, out of Mississippi State University, with their first-round pick (third overall) in the 1992 MLB amateur draft. Three picks later the New York Yankees selected Derek Jeter. Wallace, who reportedly received a $550,000 signing bonus, pitched just two seasons in the Expos organization, making it as high as double-A. The Mobile, Ala., native toed the rubber for one more season with the class-A Advanced Clearwater Phillies before hanging up his playing spikes.

·         I can say Maple Ridge, B.C., native Larry Walker deserves a plaque in Cooperstown until I’m blue in the face and few will care, but when Hall of Famer Bert Blyleven and 283-game winner Jim Kaat say it, that should carry some weight. On Monday, Kaat, who has a strong case for enshrinement himself, tweeted out a list of names of players he felt deserved to be inducted that included Walker. I re-tweeted his post to emphasize that Kaat believed Walker was a Hall of Famer. Kaat then re-tweeted my tweet, which Bert Blyleven then re-tweeted.

·         Thanks to Canadian Baseball Network lead writer Alexis Brudnicki for sharing that London, Ont., native Jamie Romak has continued his torrid 2017 home run pace with the SK Wyverns of the Korean Baseball Organization. After clubbing 11 home runs in 25 triple-A games for the El Paso Chihuahuas in the San Diego Padres organization in April, the 31-year-old slugger was sold to the Korean club and has since added 10 more homers in 21 games to give him 21 for the season.

·         Twenty-seven years ago today, one of the wildest Toronto Blue Jays games I ever remembering watching took place. The Blue Jays trailed the Boston Red Sox 10-0 after six innings at Fenway Park, but rallied for two runs in the seventh inning, four in the eighth and five in the ninth, with Canadian Baseball Hall of Famer Ernie Whitt belting a grand slam that inning. The game went into extra innings tied 11-11, before rookie Junior Felix socked a two-run home run in the top of the 12th to secure a 13-11 victory for the Blue Jays. This remains the biggest lead the Red Sox have ever squandered.

·         Former Blue Jays right-hander Brandon Morrow has tossed four scoreless innings and picked up two wins in four relief appearances since being called up by the Los Angeles Dodgers last Sunday. The injury-prone hurler signed a minor league deal with the Dodgers in January and had posted a 5.71 ERA in 17 relief appearances in triple-A prior to the call-up. Now in his 11th major league season, Morrow, who pitched almost exclusively as a starter with the Blue Jays from 2010 to 2014, is being employed solely as a reliever. He made 19 late season relief appearances for the Padres last year and posted a 1.69 ERA.

·         I’m finally reading Jane Leavy’s excellent 2002 biography about Sandy Koufax. In this fine book, it’s revealed that one unheralded influence on Koufax was Montreal native and Canadian Baseball Hall of Famer Allan Roth. Koufax frequently huddled with the Canadian statistician to study data about his starts. Early in his career, Koufax was walking far too many hitters, so he would examine the impact of his wildness with Roth. “Over the years, Roth charted 26,450 Koufax pitches and 313 of his 397 games,” writes Leavy. “Roth tracked each at-bat and the count on which the decisive pitch was made.” Roth emphasized the importance of getting ahead in the count to the young Koufax. “He [Roth] quantified how much of an advantage it was, showing Koufax the difference in the batting average against him when he was ahead in the count (.146) and behind (.286). From then on, whenever anyone asked what his best pitch was, Koufax would answer, ‘Strike one.’”

·         Please take a moment to remember baseball legend Don Zimmer, who passed away three years ago today at the age of 83 in Dunedin, Fla. “Popeye” spent 66 seasons in professional baseball as a player, coach, manager and advisor. Best known for his managerial stints with the Boston Red Sox and Chicago Cubs and more recently for serving as the New York Yankees bench coach under manager Joe Torre, Zimmer also spent a season as the Montreal Expos third base coach under manager Gene Mauch in 1971.

·         Ex-Blue Jays first baseman Adam Lind has been the best pinch-hitter in the big leagues this season. The left-handed hitting slugger is 9-for-18 with three home runs in that role. Overall, he’s batting .344 with 20 RBI in just 61 at bats for the Nats.

·         This week’s trivia question: Who holds the Blue Jays record for most pinch hits in a season? Please provide your answer in the “Comments” section below. The first person to provide the correct answer will win a 1981 Topps Carl Yastrzemski card and a 1987 Topps Traded Fred McGriff card.

·         The answer to last week’s trivia question (Right-handers Tom Henke and Duane Ward have the first and second-most saves in Blue Jays history. Who has the most saves for the club by a left-handed pitcher?) was B.J. Ryan who recorded 75 saves for the Blue Jays.