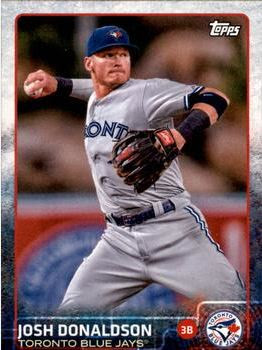 • Toronto Blue Jays third baseman Josh Donaldson is on pace to post a 9.2 WAR (Wins Above Replacement) this season. WAR is an all-encompassing statistic that measures the number of wins a player (taking into account their offensive and defensive contributions) adds to their team above a replacement level player (triple-A player). Donaldson’s WAR would be the fifth-best single-season WAR ever posted by a big league third baseman. Only Al Rosen (10.1 in 1953), Mike Schmidt (9.7 in 1974), Adrian Beltre (9.5 in 2005), George Brett (9.4 in 1980) and Alex Rodriguez (9.4 in 2005 and 2007) have registered higher WARs at the hot corner.

• Let’s just go ahead and proclaim September 10 “Canadian Baseball Day” each year. Current superstar Joey Votto (Etobicoke, Ont.) and Hall of Fame writer Bob Elliott (Kingston, Ont.) were both born on that date. And on September 10, 1965, Fergie Jenkins made his major league debut with the Philadelphia Phillies and recorded his first win. On top of all this, it was on September 10, 1977 that the Blue Jays, in their first season en route to 107 losses, smoked the eventual World Champion New York Yankees 19-3 at Yankee Stadium.

• On this day 32 years ago, Kansas City Royals closer Dan Quisenberry notched his 39th save of the season to break the record held by Canadian left-hander John Hiller (Toronto, Ont.). Hiller secured 38 saves for the Detroit Tigers in 1973. Quisenberry finished 1983 with 45 saves.

• I never thought I’d use the word “dominant” to describe Blue Jays pitcher Brett Cecil, but it’s appropriate right now. On Friday, he set a new Blue Jays record by making his 26th appearance in a row without allowing an earned run. With 24 consecutive scoreless innings heading into Sunday’s game, the southpaw reliever is two innings shy of the club record set by fellow lefty Scott Downs in 2008.

• Devon White has been added to the list of the celebrities that will attend the Canadian Baseball Hall of Fame’s second annual Baseball Fan Appreciation Luncheon that will take place this Friday at the Albany Club in Toronto. White will join Roberto Alomar, George Bell, Lloyd Moseby, Duane Ward, Paul Beeston and Alex Anthopoulos at the event, which will raise money for a new baseball shrine in St. Marys, Ont. For more information on how you can obtain tickets to the event, click on this link.

• Longtime Blue Jays fans will be excited to know that the CNE Seagull now has a Twitter account. You can follow it here. It’s a safe bet that Dave Winfield will NOT be following this account.

• Pittsburgh Pirates pitching coach Ray Searage doesn’t get enough credit for the work he has done for the Pirates. The former southpaw reliever, who spent parts of four professional campaigns in Canada with the triple-A Vancouver Canadians (1984 to 1986) and Edmonton Trappers (1992), has become a master at helping pitchers rediscover their mojo. Former Blue Jays A.J. Burnett and J.A. Happ, who’s 5-1 with a 1.79 ERA in seven starts with the Pirates since being acquired at the trade deadline, have been beneficiaries of Searage’s wisdom, as have Francisco Liriano (3.28 ERA in 27 starts), Mark Melancon (45 saves) and Joe Blanton (1.11 ERA in 13 games). The careers of all five of these pitchers were in serious decline before they landed with the Bucs.

• My hope is that some in the baseball world paused on Friday to remember Marty Boryczewski. He was a catcher with the Pioneer League’s Lethbridge Mounties in the Pittsburgh Pirates organization in 1994 before moving on to a career in investment banking with Cantor Fitzgerald in New York City. He was working in the World Trade Center on September 11, 2001 when it was attacked. He died when he was only 29.

• On this date in 1991, Joe Carter drove in his 100th run of the season for the Toronto Blue Jays, making him the first player in major league history to reach 100 RBI in three consecutive seasons for three different teams. Carter, who was elected to the Canadian Baseball Hall of Fame in 2003, knocked in 105 runs for the Cleveland Indians in 1989 and 115 runs for the San Diego Padres in 1990.

• The recent heat wave in Southwestern, Ont., reminded me of one of my favorite Yogi Berra stories. One day in the late 1960s, Berra was invited to a reception at New York mayor John Lindsay’s residence on a sweltering hot day. Everyone at the event was sweating and Berra strolled in late wearing a light, lime-green suit. The mayor’s wife, Mary, saw Berra approaching and welcomed him to their home. “You certainly look cool, Yogi,” she said. “Thanks, you don’t look so hot yourself,” replied Berra.

• This week’s trivia question: Blue Jays outfielder Jose Bautista recorded his 100th RBI of the season in the second game of Saturday’s double-header to join Josh Donaldson as a member of the 100-RBI club. Blue Jays DH/1B Edwin Encarnacion has 99 RBI and is certain to join Bautista and Donaldson in the century club. When was the last time the Blue Jays had three players register 100 RBI in the same season and who were the three players? Please provide your answer in the “Comments” section below. The first person to provide a correct answer will win 1979 Topps Willie McCovey and Lou Brock cards.