Manning right field for the Houston Astros, the Melville, Sask., native took off after a deep fly ball that Los Angeles Dodgers catcher Mike Scioscia clubbed to right-centre off of Ryan in the top of the seventh inning at the Astrodome on September 26, 1981. In full sprint, Puhl managed to snag the ball on his backhand just above his shoe tops. (You can watch a video of the catch here.). That was the closest the Dodgers would come to registering a hit off of the Ryan Express that day. The legendary right-hander finished with 11 strikeouts in the Astros’ 5-0 win.

“After the game, Nolan came over and said to me, ‘I just wanted to say good catch.’ That meant a lot to me,” recalled Puhl in a 2004 interview.

Puhl, who owns the highest career fielding percentage by a National League outfielder who has played at least 1,000 games, made plenty of good catches behind Ryan during the nine seasons they were teammates, and few had a better first-hand view of Ryan’s dominance than the Canadian outfielder.

During his 27-year big league career, in which he also pitched for the Mets, Angels and Rangers, Ryan tossed seven no-hitters, won 324 games and struck out a record 5,714 batters. The eight-time all-star also established a single-season strikeout mark when he fanned 383 hitters in 1973 and authored 37 complete games in which he permitted two hits or less (No other pitcher has more than 17.). For his efforts, he was elected to the National Baseball Hall of Fame in 1999, his first year of eligibility.

And Ryan’s Canadian connections extend past playing with Puhl. Some of the menacing Texan’s greatest accomplishments came against the Montreal Expos and Toronto Blue Jays. Here’s a rundown of some of his achievements against these Canadian clubs, as well as some of his other connections to the Great White North: 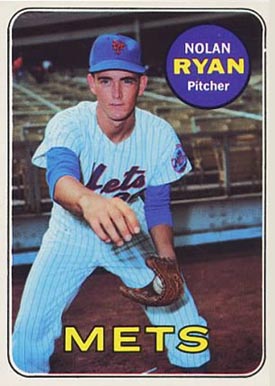 – On April 27, 1983, Ryan struck out Expos pinch-hitter Brad Mills in the eighth inning at Olympic Stadium to record his 3,509th career strikeout to break Walter Johnson’s 56-year-old strikeout record. It was one of five strikeouts that Ryan registered in pitching the Astros to a 4-2 win that day.

– Ryan struck out 19 batters in four different games during his career. One of those performances came against Toronto on June 8, 1977. On that day, he allowed just one run in 10 innings, but did not get a decision. Blue Jays right fielder Otto Velez struck out four times and Vancouver, B.C., native Dave McKay,  who started at second base, whiffed three times. The Angels eventually won 2-1 in 13 innings.

– The intimidating Texan secured his seventh – and final – career no-hitter on May 1, 1991 against the Blue Jays at Arlington Stadium (You can watch video of it here.). The then 44-year-old Ryan struck out 16 Jays in the Rangers’ 3-0 win. Canadian Baseball Hall of Famers Roberto Alomar (three times) and Joe Carter (once) were among Ryan’s strikeout victims that day.

– On top of his seven no-hitters, Ryan also tossed 12 one-hitters during his career. He hurled one of his one-hitters against the Blue Jays on April 23, 1989 at Exhibition Stadium. Ryan registered 12 strikeouts in the Rangers’ 4-1 victory that day. Canadian Baseball Hall of Famers George Bell (once), Ernie Whitt (twice) and Rob Ducey (once) were among the Jays who struck out in that contest.

– Cambridge, Ont., native Rob Ducey was the Rangers’ starting centre fielder in Ryan’s final big league start, which took place at the Kingdome in Seattle on September 22, 1993. It was a start that Ryan would like to forget. The legendary right-hander allowed five runs on two hits and four walks and was lifted in the first inning without recording an out. Canadian Baseball Hall of Famer Tom Henke pitched the ninth inning for the Rangers in the 7-4 loss.

– As an opponent, Ducey had one hit in four at bats against Ryan. Just two other Canadians had big league plate appearances against Ryan and both went hitless: Doug Frobel (Ottawa, Ont., 0-for-7) and Dave McKay (Vancouver, B.C., 0-for-10).