For the past month, I’ve been posting an “Uplifting Canadian Baseball Photo/Video of the Day” on Twitter and Facebook.

I realize that many of you don’t follow me on social media, so each Friday, my plan is to share the top three (most retweeted, liked or shared) of these posts with you (from the previous five days).

I hope these photos/videos will bring a smile to your face during these challenging times.

1. The 52nd anniversary of the city of Montreal being awarded an MLB franchise.

This photo of legendary Montreal Expos executives and Canadian Baseball Hall of Fame inductees Jim Fanning and John McHale was, by far, the most shared of my posts on Facebook from the past week. These two men are the most responsible for bringing Major League Baseball to Canada.

2. A fitting goodbye to Exhibition Stadium

This footage (below) of Toronto Blue Jays slugger and Canadian Baseball Hall of Fame inductee George Bell belting a walk-off, two-run home run off Chicago White Sox closer Bobby Thigpen in the 10th inning of the final game at Exhibition Stadium on May 28, 1989 was popular on my Facebook page.

And really, you couldn’t have written a better script for the last game at Exhibition Stadium.

Today is the 28th anniversary of Canadian Baseball Hall of Fame inductee and Fredericton, N.B., native Matt Stairs’ major league debut.  He was sent to the plate to pinch-hit for Montreal Expos pitcher Jeff Fassero in the 10th inning against Cincinnati Reds pitcher Rob Dibble. Stairs struck out, but he went on to club a MLB record 23 pinch-hit home runs.

These two 1989 minor league Stairs cards (below) always bring a smile to my face. These cards list Stairs’ positions as “Infielder” on one and “Third Base” on the other. Stairs once told me he was a shortstop in his teenage years. 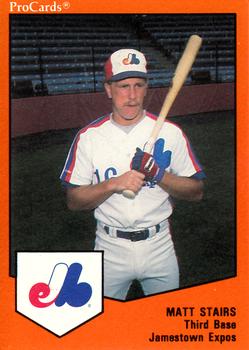