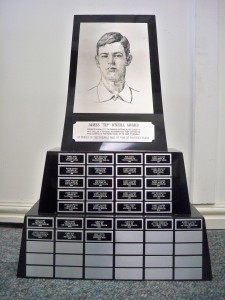 Yes, James Paxton (Ladner, B.C.) and Joey Votto (Etobicoke, Ont.) enjoyed strong seasons in 2018. But so, too, did outfielder Tyler O’Neill (Maple Ridge, B.C.), who made his major league debut with the St. Louis Cardinals and socked nine home runs and had a .500 slugging percentage in 61 big league games. He also clubbed 26 home runs in triple-A. And Montreal-born Vladimir Guerrero Jr. cemented his status as baseball’s No. 1 prospect by leading the minor leagues in batting average, hitting a combined .381 and belting 20 home runs in 95 games in the Toronto Blue Jays’ system.

And while these Canadians were starring in North America, others were shining in the international ranks. Jamie Romak (London, Ont.) set career-bests with a .316 batting average and 43 home runs with the Korean Baseball Organization’s SK Wyverns, while North Battleford, Sask., native Andrew Albers was an all-star with the Orix Buffaloes of Japan Pacific League, posting a 9-2 record and a 3.08 ERA in 19 starts.

Meanwhile, Daphnée Gélinas was starring for the Canadian Women’s National Team. The Repentigny, Que., native went 9-for-22 (.409 batting average) – including two doubles, one triple and one home run – to help Canada’s national squad secure a bronze medal at the WBSC Women’s Baseball World Cup in August. For her efforts, she was named the Women’s National Team MVP.

So in a year with so many highlights, how do you choose which Canadian stood out the most?

That’s the dilemma the Canadian Baseball Hall of Fame faces, and they would like your input to determine Canada’s top performer as they prepare to chose their 2018 James “Tip” O’Neill Award winner. This honour is given out annually to the player judged to have excelled in individual achievement and team contribution while adhering to baseball’s highest ideals.

The Hall encourages you to vote for the players you think are worthy of this award by noon E.T. on Wednesday, November 21. You can e-mail your top three choices (please be clear on your first, second and third selections) to baseball@baseballhalloffame.ca or you can vote on the Hall’s website at http://www.baseballhalloffame.ca.

Fan votes will be one of the criteria the Hall will take into account when selecting the winner, which will be announced on December 4.

Here’s a summary of the prime contenders (and their 2018 accomplishments) in alphabetical order. (The Hall also welcomes write-in votes for players not on this list):

The 33-year-old first baseman enjoyed his longest tenure in the big leagues in 2018, batting .267 in 59 games for the Detroit Tigers. Among his 47 major league hits, 13 went for extra bases, including eight doubles, two triples and three home runs. He also hit .309 and socked seven home runs in 70 contests for the triple-A Toledo Mud Hens.

In his first year with the Orix Buffaloes of the Japan Pacific League, the 33-year-old southpaw excelled, posting a 9-2 record and a 3.08 ERA in 19 starts while striking out 83 in 114 innings. The 6-foot-1 lefty was first among Canucks in the independent or foreign ranks in wins, second in innings pitched, third in ERA and WHIP and fourth in strikeouts. For his efforts, he was named the Canadian Baseball Network’s pitcher of the year in the foreign and independent ranks.

Gelinas went 9-for-22 (.409 batting average) – including two doubles, one triple and one home run – to help the Canadian Women’s National Team secure a bronze medal at the WBSC Women’s Baseball World Cup in Viera, Fla., in August. The hot-hitting infielder also scored seven runs and had a team-high 16 total bases in the tournament. She was at her best in the bronze medal contest when she went 3-for-4, clubbing a three-run home run in the fifth inning and adding an RBI single in the 10th. For her efforts, she was named the Women’s National Team MVP.

In four stops in the Toronto Blue Jays’ system, the 19-year-old Montreal-born slugger batted a minor-league best .381 in 95 games. He also added 136 hits, 20 home runs, 78 RBI. For his efforts, he was named Baseball America’s Minor League Player of the Year and MLB Pipeline Hitter of the Year and received Baseball America First-Team All-Star Honours.

In the fourth year of his five-year contract with the Blue Jays, the hard-nosed catcher walloped 10 home runs and posted a .338 on-base percentage (OBP) in 90 games. His 10 home runs were second among Canadian big leaguers in 2018. The Montreal-raised backstop also managed the final game of the Blue Jays’ season, making him the first Canadian to manage an entire big league game since Rob Thomson served as interim skipper for a game with the New York Yankees on May 19, 2017. He was also active in charitable endeavors for the Jays Care Foundation, most prominently lending his name to the second annual 55 Poker Classic, which raises money for projects that will aim to shrink the opportunity gap for marginalized children across Canada.

This 23-year-old slugger made his major league debut with the St. Louis Cardinals and socked nine home runs and had a .500 slugging percentage in 61 big league games. He also batted .311 and clubbed 26 homers and collected 63 RBI in 64 triple-A contests. His nine home runs ranked third among Canadian big leaguers, while his 26 homers were the most by a Canuck in the affiliated minor league ranks.

The Seattle Mariners southpaw became the first Canadian pitcher to throw a major league no-hitter on Canadian soil when he held the Blue Jays hitless on May 8 at Rogers Centre. That performance came six days after he had set a Canadian record by striking out 16 batters on May 2 in a start against the Oakland A’s. In all, Paxton had eight starts in which he struck out at least 10 batters and went 11-6 with a 3.76 ERA and fanned 208 batters in 160 1/3 innings. His 208 strikeouts are the second-most by a Canadian left-hander in a major league season and he became one of only two pitchers in big league history to notch 200 strikeouts in a season in 161 or fewer innings. Among American League pitchers with at least 160 innings pitched, Paxton finished third in strikeouts per nine innings (11.68), fourth in strikeout-to-walk ratio (4.95), seventh in WHIP (1.10) and ninth in opponents’ batting average against (.224).

With his 43 regular season home runs for the SK Wyverns of the Korean Baseball Organization (KBO) in the 2018 regular season, the 33-year-old slugger became the first Canadian to sock 40 home runs in consecutive seasons at the professional level. He had a combined 42 home runs between the KBO and triple-A in 2017. Romak’s 2018 campaign was easily his best in the pro ranks. He not only set a career-high in home runs, but also in batting average (.316), runs (102), hits (167) and RBI (107). He also helped lead his club to a KBO championship. For his efforts, he was unanimously voted the Canadian Baseball Network’s top offensive hitter in foreign or independent ball for the second consecutive season.

After making a strong impression in his rookie season, the 6-foot-5 right-hander’s numbers improved across the board in his sophomore 2018 campaign. His 32 starts and 188 strikeouts for the Philadelphia Phillies were the eighth most by a National League pitcher.  His 10.32 strikeouts per nine innings ranked fifth in the National League and he finished the season with a 7-14 record and a 4.77 ERA.

The former Blue Jays pitcher topped the Italian Baseball League in ERA (1.81), strikeouts (105) and innings pitched (89 1/3) while toeing the rubber for the Nettuno baseball club this season. This was the first year that the 39-year-old right-hander pitched in Italy. Richmond had toed the rubber in the Chinese Professional Baseball League in the previous two campaigns.

After opening the season with a combined 1.76 ERA in six starts between the class-A and triple-A levels, the 6-foot-5 right-hander was called up by the Atlanta Braves. In his major league debut, on May 1, 2018, he limited the New York Mets to one run in six innings, while fanning five batters, to pick up the win. At just 20 years and 270 days old, Soroka became the third youngest Canadian pitcher to notch a win in their big league debut. He’d make four more starts for the Braves and finished with a 2-1 record and a 3.51 ERA, while striking out 21 in 25 2/3 innings, before being shut down with a shoulder injury.

The Cincinnati Reds first baseman continued his excellent major league career by leading the National League in on-base percentage (.417) for the seventh time. He also walked 108 times, good for third among NL players. Votto also topped Canadian big leaguers in batting average (.284), hits (143), doubles (28), home runs (12) and RBI (67). In the field, he finished second among NL first basemen in assists (142) and third in range factor per nine-innings (9.06) and was named a Gold Glove finalist. Votto is also heavily involved with the Reds Community Fund, the club’s non-profit arm that’s dedicated to improving the lives of youth. He also regularly visits the Cincinnati Children’s Hospital Medical Center and participates in meet and greets with patients and staff at the ballpark throughout the season.

Following a strong showing with San Diego Padres’ double-A and triple-A affiliates that saw him register 14 saves, post a 2.67 ERA and strike out 64 batters in 54 innings, the hard-throwing right-hander was called up to make his big league debut on August 31. He tossed a scoreless ninth inning against the Colorado Rockies in his first taste of big league action. In all, in 10 apperances with the Padres, Wick toed for the rubber for 8 1/3 innings and struck out seven, while registering a 6.48 ERA.

The Hall’s Tip O’Neill Award is named after Woodstock, Ont., native James “Tip” O’Neill, who was one of Major League Baseball’s first legitimate stars. With the American Association’s St. Louis Browns in 1887, O’Neill set big league records in hits, doubles, slugging percentage and total bases, while compiling a major league record .492 batting average. Walks were counted as hits in 1887, but if O’Neill’s average was calculated by today’s standards, it would be .435, the second-highest in big league history to Hugh Duffy who hit .440 in 1894.

Past winners of the James “Tip” O’Neill Award: