·         For those of us who remember the exciting Montreal Expos teams from the ’80s and ’90s, one of the highlights of the Toronto Blue Jays exhibition games at Olympic Stadium over the past three years has been the Expos legends that have returned and have been honoured prior to the contests. But while his Montreal-born son will be there in a Blue Jays uniform on Monday and Tuesday, Vladimir Guerrero Sr., who was inducted into the Canadian Baseball Hall of Fame in 2017 and will receive a plaque in Cooperstown this July, will not. In a statement on his Facebook page, the senior Guerrero said he will not be able to attend for “family reasons.” I can’t find an official announcement of what former Expos will be at Olympic Stadium for the Blue Jays exhibition games, but Perry Giannias, who’s holding his annual ExposFest fundraiser tonight, has John Wetteland, Larry Parrish, Orlando Cabrera, Darrin Fletcher, Jose Vidro, Chris Speier, Ellis Valentine, Ken Hill, Bill Lee, Canadian Baseball Hall of Famer Steve Rogers and Derek Aucoin (Lachine, Que.) as guests. Also, Tim Raines indicated on Twitter on Sunday that he is in Montreal.

·         Toronto Blue Jays manager John Gibbons has all-but-confirmed that Port Dover, Ont., native John Axford will be part of his bullpen for his club’s regular season opener on Thursday. The 6-foot-5 right-hander, who was inked to a minor league deal this off-season, has posted a 1.35 ERA and struck out eight batters in 6-2/3 innings this spring. The Canadian veteran struggled in 2017 after beginning the campaign on the disabled list with a right shoulder injury. In 22 appearances with the Oakland A’s last season, he posted a 6.43 ERA but he was still averaging 95 mph with his fastball. Set to turn 35 on Sunday, Axford has registered a 3.71 ERA and notched 144 saves in 493 career major league appearances with the Milwaukee Brewers, St. Louis Cardinals, Cleveland Indians, Pittsburgh Pirates, Colorado Rockies and the A’s.

·         The most quietly effective pitcher for the Blue Jays this spring has been former first-round pick Deck McGuire. The 6-foot-6 righty is 2-0 and has not allowed a run while striking out 13 in 10-2/3 innings in seven appearances. McGuire, who was selected 11th overall by the Blue Jays in 2010, previously spent parts of five seasons in the organization before enduring stints in the Los Angeles Dodgers’ and St. Louis Cardinals’ systems. In February 2017, he was signed by the Cincinnati Reds and proceeded to record a 2.79 ERA in 28 starts for the Reds’ double-A Southern League Pensacola squad. In September, he was called up by the Reds and registered a 2.63 ERA in six contests. Following the season, the now 28-year-old hurler signed a minor league deal to return to the Blue Jays. Despite his outstanding spring, there’s virtually no chance he’ll crack the Blue Jays crowded big league staff to begin the season, but he’ll likely be a key pitcher for the triple-A Buffalo Bisons.

·         Despite a strong spring with the Detroit Tigers, Burnaby, B.C., native Jim Adduci was reassigned to the club’s minor league camp on Thursday. The left-handed hitting slugger went 10-for-36 (.278 batting average) with two home runs and five RBI for the Tigers this spring. Adduci enjoyed three separate major league stints with the Tigers in 2017, but he spent the last portion of the season with the triple-A Toledo Mud Hens after he was sent down August 12. In 29 contests with the Tigers in 2017, Adduci went 20-for-83 (.241 batting average) and he finished with a .323 on-base percentage (OBP). J.P. Antonacci recently wrote an interesting article about Adduci for the Canadian Baseball Network. You can read it here.

·         One former Jay who’s not unemployed is Ryan Goins, who signed a minor league deal with the Kansas City Royals in January that will pay him $1 million (plus incentives) if he makes the big club. The sure-handed infielder is making it hard for Royals not to take him north. Goins has been a force at the plate this spring, batting .350 (14-for-40) with two doubles, a triple, six walks and eight RBI in 22 games.

·         Happy 49th Birthday to five-time American League all-star Travis Fryman. The 6-foot-1 third baseman batted .274 and belted 223 home runs in 1,698 games in his 13-year big league career with the Detroit Tigers and Cleveland Indians from 1990 to 2002. Along the way, he also collected a Silver Slugger Award and a Gold Glove Award. For me, however, Fryman, will always be a London Tiger. Fryman was the first professional baseball star that I remember playing in my hometown. With the double-A Eastern League London Tigers in 1989, Fryman batted .265 with nine home runs in 118 games. 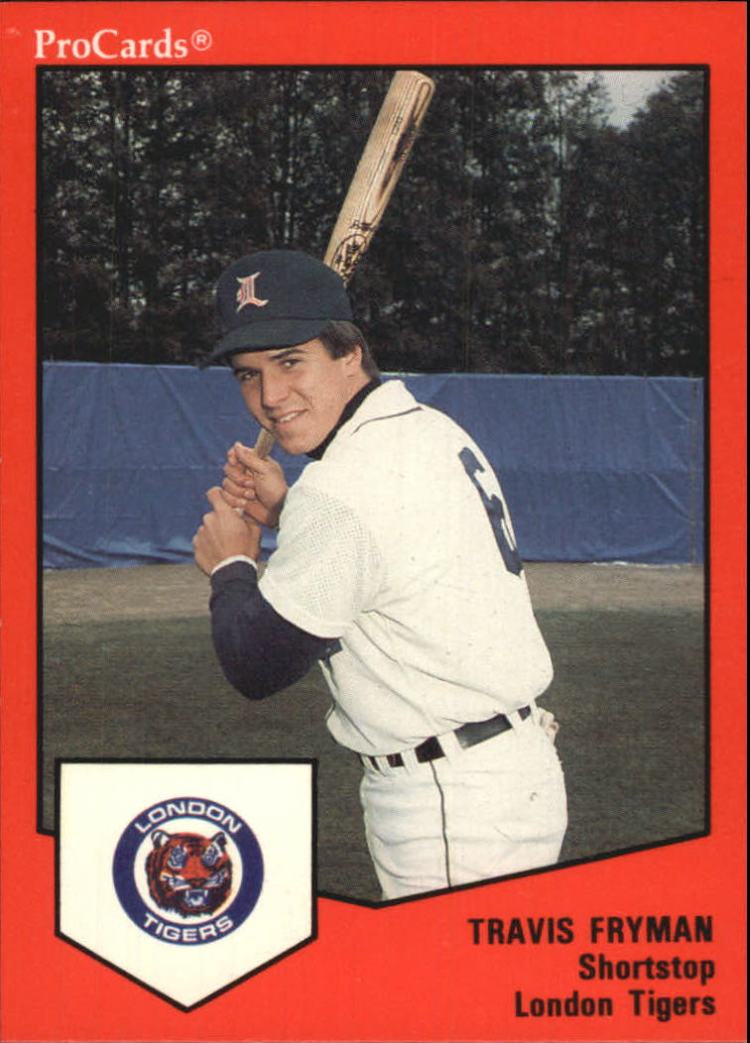 ·         Thank you to Eric Rosenhek (@TheHek) from Definitely Not Jays Talk for sharing the following footage of the 1982 Pearson Cup game that was played on September 2, 1982 at Exhibition Stadium. Spoiler Alert: The Expos beat the Blue Jays 7-3. It was the fourth of eight exhibition Pearson Cup games between the Blue Jays and Expos.

·         This week’s trivia question: This promising Canadian sustained a groin injury sliding into home plate in the first Pearson Cup Game played on June 29, 1978 at Olympic Stadium. Can you name him? Please provide your answer in the “Comments” section below. The first person to provide the correct answer will win a 1969 Topps Pete Ward card, a 1970 O-Pee-Chee Billy Williams card, a 1970 Topps Mel Stottlemyre card and a 1990 Score Update Frank Thomas rookie card.

·         The answer to the March 11 trivia question (John Axford (Port Dover, Ont.) has a good chance to pitch of the Blue Jays bullpen this season. Who is the last Canadian to make a regular season relief appearance for the Blue Jays?) was left-hander Scott Diamond (Guelph, Ont.) who pitched the ninth inning for the Blue Jays in a 7-0 loss to the Philadelphia Phillies at Rogers Centre on June 13, 2016.

15 thoughts on “But What Do I Know? . . . Vladimir Guerrero, John Axford, Jim Adduci, Ryan Goins”