But What Do I Know? . . . Justin Morneau, Larry Walker, Vernon Wells, Charlie Gehringer

·         My friends sometimes ask me who the nicest major league player I’ve ever met is. My answer has been New Westminster, B.C., native Justin Morneau. He was an American League MVP, a home run derby champ, a team leader, a great representative for Canada and an even better person. As Morneau officially announced his retirement at a press conference at Target Field in Minneapolis on Wednesday, it got me thinking about my four or five interactions with him over the years. My longest conversation with him was when I was part of the Canadian Baseball Hall of Fame contingent that presented him with the 2008 Tip O’Neill Award prior to a game at the Metrodome. I wanted to write an article for the Hall’s website and I set up an interview with him. He spoke with me at his locker for approximately 30 minutes, telling me about his love for the Vancouver Canucks, Patrick Roy (the reason he wore No. 33), Larry Walker’s influence and his family. After the interview, I was walking down the hallway outside the clubhouse and a Twins official asked me if Morneau had said anything about the charity work he does. I told him that Morneau didn’t mention that. The official then began rhyming off the long list of charities that Morneau and his wife, Krista, supported. That’s the kind of guy Morneau is. He’s generous, selfless and humble and he prefers to contribute quietly, out of the spotlight. He has set a fine example for up-and-coming Canadian big leaguers and I’m sure he’ll be a tremendous asset to the Twins in his new role as a special assistant.

·         I asked fellow Canadian and former Minnesota Twins teammate Andrew Albers (North Battleford, Sask.) about Morneau at the press conference prior to the Baseball Canada National Teams Awards Banquet and Fundraiser last Saturday: “I remember Justin being a tremendous leader in the clubhouse. He was just a tremendous clubhouse presence. He really brought guys together around him. He brought guys together so that they were on the same page and so that they were going in the same direction. He really kind of took me under his wing when I got up there [to Minnesota] in 2013 and made my debut and I’m very thankful to him for that. And I think he’ll be tremendous in whatever he does. He is a great baseball mind and the guy could flat out hit. He really knows the game of baseball and he’s very personable to other people. So I think he will be tremendous at whatever role he’s in. I think for the Twins that’s a great hire no matter what capacity it’s in because having Justin Morneau in the organization is always going to be a good thing.”

·         Maple Ridge, B.C., native Larry Walker will not be part of the National Baseball Hall of Fame’s class of 2018 when the baseball writers’ voting results are announced on Wednesday. But as I’ve noted in previous columns,with a likely 20 per cent increase in support for Walker from the previous year, I finally have hope that one day the Canadian slugger will be elected. I grew even more optimistic when I was examining Walker’s Baseball Reference page and discovered that the player he’s most statistically similar to is Duke Snider. A longtime Dodgers star who also played with the Montreal Royals and later served as a broadcaster for the Expos, Snider generated just 17 per cent support from baseball writers in his first year on the National Baseball Hall of Fame ballot in 1970. Eleven years later, he was elected when his name was checked on 86.5 per cent of writers’ ballots. Now in his eighth year on the ballot, Walker received 20.3 per cent in his first year – 3.3 per cent higher than Snider – so it’s not impossible that he could reach 75 per cent support by his final year on the ballot (2020).

·         Seven years ago today, Toronto Blue Jays general manager Alex Anthopoulos (Montreal, Que.) pulled off the seemingly impossible when he dealt centre fielder Vernon Wells and most of the $86 million that was remaining on his massive contract to the Los Angeles Angels for outfielder Juan Rivera and catcher Mike Napoli. It was, indeed, one of Anthopoulos’s greatest transactions, but I had forgotten that Wells actually had 31 home runs and 4.0 WAR in the season preceding the deal. Wells would struggle in two seasons with the Angels before finishing his career with the New York Yankees in 2013. Meanwhile, Rivera also scuffled with the Blue Jays, batting .243 with six home runs in 70 games in 2011 before being dealt to the Dodgers. And four days after he was acquired, Napoli was flipped to the Texas Rangers for reliever Frank Francisco. Francisco posted a 3.55 ERA and registered 17 saves in 54 games for the Blue Jays in 2011, while Napoli enjoyed a career year in Texas, batting .320 with 30 home runs.

·         Twenty-five years ago today, Hall of Famer Charlie Gehringer passed away at the age of 89. The Detroit Tigers legendary second baseman, who played in the first six major league all-star games, was a model of consistency during his 19-year big league career, batting .320 both at home and on the road. Prior to joining the Tigers, the quiet infielder made two Canadian stops. In 1924, he batted .292 with three home runs in 112 games for the Class-B Michigan-Ontario League’s London Tecumsehs, before graduating to the International League’s Toronto Maple Leafs the following year where he hit .320 with 25 homers in 155 contests. 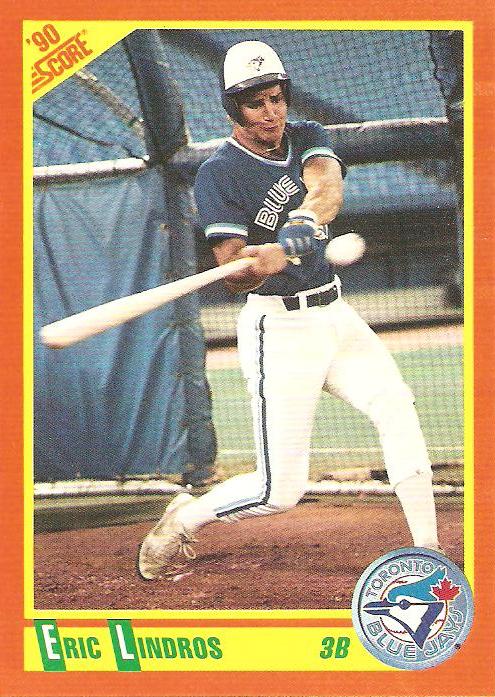 ·         As a Canadian baseball fan, whenever Eric Lindros is in the news, the image of him taking batting practice with the Toronto Blue Jays on his 1990 Score Traded baseball card (above) pops into my head. Lindros, who had his No. 88 retired by the Philadelphia Flyers on Thursday, was once also considered a baseball prospect. The back of this Score card describes him as a “big, 17-year-old power hitter” who “batted over .400 in high school.” The card indicates that Lindros would be given a tryout with the Blue Jays. “He’s an unknown quantity right now because he’s so inexperienced,” says a scout, quoted on the card back. “But he has all the tools to make it big.”

·         This week’s trivia question: Lindros never did play both professional hockey and baseball, but one Canadian Baseball Hall of Fame inductee did. Can you name him? Please provide your answer in the “Comments” section below. The first person to provide the correct answer will win a Tony Fernandez autographed photo.

13 thoughts on “But What Do I Know? . . . Justin Morneau, Larry Walker, Vernon Wells, Charlie Gehringer”