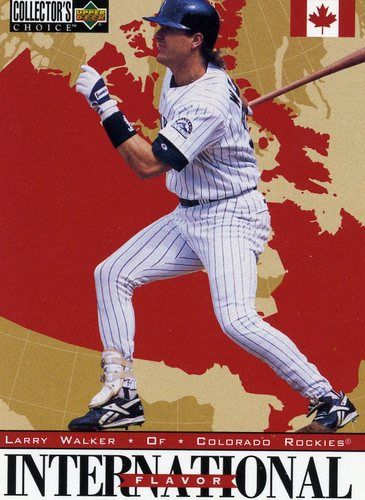 ·         The primary knock against Larry Walker’s case for induction into the National Baseball Hall of Fame has been that he played his home games at Coors Field for 10 seasons. So I thought I would compare Walker’s career road on-base plus slugging percentage (OPS) to some of the outfielders that already have a plaque in Cooperstown. Walker’s career road OPS was .865, that’s better than Ken Griffey Jr. (.860), Reggie Jackson (.860), Dave Winfield (.841), Tony Gwynn (.835), Roberto Clemente (.810), Andre Dawson (.800) and Jim Rice (.789). Sadly, out of the 15 baseball writers’ Hall of Fame ballots that have been made public, according to Ryan Thibodaux (@NotMrTibbs on Twitter), Walker has received just four votes.

·         The next manager of the New York Yankees will not be Corunna, Ont., native Rob Thomson. Aaron Boone will reportedly be unveiled as the new Bronx Bombers bench boss this week. It has also been reported that Thomson will leave the Yankees organization after 28 years to become the bench coach of the Philadelphia Phillies under their new skipper Gabe Kapler.

·         My early Christmas wish: That more baseball people would talk about the courageous and trailblazing Alison Gordon than Gregg Zaun. It saddens me that on the day that it was announced that Gordon would be honoured with the Canadian Baseball Hall of Fame’s Jack Graney Award that this news was overshadowed by Zaun being fired for the same sort of comments that Gordon was forced to endure when she covered the Toronto Blue Jays 38 years ago as the first female major league beat reporter.

·         Mark this Tuesday, December 5, on your calendar. That’s when the Canadian Baseball Hall of Fame will reveal its 2017 Tip O’Neill Award winner. The St. Marys, Ont.-based shrine presents this honour annually to the Canadian player judged to have excelled in individual achievement and team contribution while adhering to baseball’s highest ideals.

·         Congratulations to Windsor, Ont., native Stubby Clapp who was named Baseball America’s Minor League Manager of the Year on Thursday. This is the second major managerial honour for Clapp. In September, he was named Pacific Coast League Manager of the Year for leading the St. Louis Cardinals triple-A Memphis Redbirds to a franchise record for wins and a division title. He’d later led the club to a league championship. Clapp is in his 11th professional season as a coach and his third as a manager. The longtime Canadian national team member and coach, who played 23 games for the Cardinals in 2001, should be a candidate for big league managerial jobs in the future.

·         After making his big league debut with the Philadelphia Phillies this season, Montreal native Jesen Therrien signed with the Los Angeles Dodgers on Wednesday. According to Matt Eddy of Baseball America, the 6-foot-2 right-hander inked a two-year minor league deal. Therrien underwent Tommy John surgery in September and will miss the 2018 season. The Canadian righty posted an 8.35 ERA in 15 relief appearances for the Phillies in his first taste of big league action. Scouted by Canadian Alex Agostino, Therrien was selected in the 17th round of the 2011 MLB draft by the Phillies. The 24-year-old hurler was dominant in double-A and triple-A in 2017, posting a combined 1.41 ERA in 57-1/3 innings while registering 65 strikeouts.

·         On Thursday, the Chicago Cubs shared this historic photo (above) of Fergie Jenkins receiving his 1971 National League Cy Young Award at Wrigley Field. This was the first time that a Canadian had received this honour (Eric Gagne (Mascouche, Que.) later won the award in 2003). So just how impressive was Jenkins in 1971? Well, that season the Chatham, Ont., native led the National League with 24 wins, 30 complete games, 39 starts, 325 innings pitched and a 12.0 WAR. And if his pitching stats don’t blow you away, he also belted six home runs and drove in 20 runs in 39 games. His .478 slugging percentage that season was better than his Hall of Fame teammate Ron Santo’s .423 slugging percentage.

·         Please take a moment to remember Canadian Baseball Hall of Fame inductee Billy Harris who would’ve turned 87 today. Born in Duguayville, N.B., Harris caught the eye of big league scouts when he led the Dieppe Junior Cardinals to a Maritime championship in 1949 and the Moncton Legionnaires to a senior title the following year. Signed by the Brooklyn Dodgers in 1951, the Canuck hurler notched 18 wins and recorded a 2.19 ERA for class-D Valdosta in his inaugural professional campaign. He would top that the next season, when he won 25 games, tossed 12 shutouts and registered a miniscule 0.83 ERA for the class-B Miami Sun Sox. Trapped in the pitching-rich Dodgers system behind legends like Sandy Koufax, Don Drysdale and Don Newcombe, Harris had little opportunity to shine at the major league level. After recording 16 wins with the triple-A Montreal Royals in 1957, the determined Maritimer was called up and made his first – and only – big league start on September 27 of that year. Harris returned to the minors in 1958 and for most of 1959, before making his second and final major league appearance with the Los Angeles Dodgers. In all, Harris pitched for 15 professional seasons and amassed 174 wins and 1,373 strikeouts.

·         If you’re looking for a Christmas gift for the baseball fan in your family, the Canadian Baseball Hall of Fame is holding its annual Holiday Silent Auction. The auction is chock full of baseball autographs and memorabilia. You can check out the auction items here.

·         This week’s trivia question: Outside of Walker and Joey Votto, there have been two other Canadians that have won the Canadian Baseball Hall of Fame’s Tip O’Neill Award three times. Can you name them? Please provide your answer in the “Comments” section below. The first person to provide the correct answer will win a 1977 Topps Gaylord Perry card, a 1979 Topps Joe Morgan card and a 1985 Fleer Paul Molitor card.

10 thoughts on “But What Do I Know? . . . Larry Walker, Rob Thomson, Alison Gordon, Fergie Jenkins”