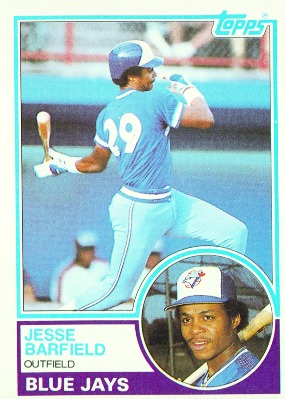 • Former Toronto Blue Jays outfielder Jesse Barfield announced on Twitter on Monday that he’s 100 per cent cancer-free. The popular ex-Jay has not disclosed the type of cancer he was battling. Throughout his private battle, the 56-year-old Barfield remained active in baseball, participating in Blue Jays clinics and working as a hitting instructor for Competitive Edge Sports in Houston.

• One of Barfield’s former teammates, Damaso Garcia celebrates his 59th birthday today and he has done so against long odds. The former Blue Jays second baseman was diagnosed with a malignant brain tumor in 1991 and given six months to live. But Garcia has survived for almost 25 years and has overcome significant health challenges to establish baseball camps for kids with disabilities in his native Dominican Republic. Baseball friends like Tony Fernandez, Pedro Martinez and Moises Alou have helped with the camps. Garcia spent parts of seven big league seasons with the Blue Jays and was the club’s first all-star second baseman. He finished his major league career with the Montreal Expos in 1989.

• Fun Canadian Baseball Fact: Maple Ridge, B.C., native Larry Walker had a .565 slugging percentage during his major league career. This is the 12th best in major league history. Players that rank below Walker on that list include Willie Mays, Mickey Mantle and Hank Aaron.

• Remember that guy on Twitter in January 2012 that claimed to be Gavin Floyd’s cousin and tweeted that Floyd was about to be traded to the Blue Jays? At that time, with Floyd coming off a 12-win season with the White Sox and the Blue Jays in dire need of rotation help, the cousin’s tweets created a buzz amongst Blue Jays fans. Relatively quickly, however, his tweets were dismissed and a mock website called IsGavinFloydABlueJay.com (since taken down) was created. Well, four years later, that “cousin” may take some solace in knowing that the Jays have signed Floyd to a one-year, $1-million contract. It’s surprising to me that the 6-foot-4, 245-pound right-hander, who has endured Tommy John surgery and two subsequent elbow surgeries in the past three seasons, got a major league deal, but Blue Jays president Mark Shapiro and general manager Ross Atkins saw Floyd pitch 13-1/3 innings with the Cleveland Indians at the end of last season. The 33-year-old hurler was an effective starter with the White Sox from 2009 to 2012. He could serve as a long man and spot starter for the Blue Jays.

• Somehow I missed that former Blue Jay Dustin McGowan signed a minor league deal with the Miami Marlins on December 12. After parts of seven, injury-riddled seasons with the Blue Jays, McGowan posted a 6.94 ERA and walked 20 batters in 23-1/3 innings for the Phillies last season before he was shipped to triple-A. McGowan’s contract with the Marlins includes an invite to big league spring training.

• In honour of Hank Aaron’s 82nd birthday on Friday, I thought I’d share with you one of his best quotes. It seems that while the Hammer was historically great with a bat, he was not so effective with a golf club. “It took me 17 years to get 3,000 hits in baseball,” he once said, “but I did it in one afternoon on the golf course.”

• This week’s trivia question: In keeping with the fun I’ve been having with first names of Canadian Baseball Hall of Fame inductees, there are also four inductees with the first name “Tom.” Can you name three of them? Please provide your answer in the “Comments” section below. The first person to provide the correct answer will win a Fred McGriff rookie card.