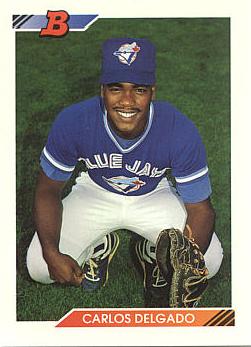 Some news and notes from this year’s Canadian Baseball Hall of Fame induction ceremony that took place on Saturday in St. Marys, Ont.:

• 2015 inductee Carlos Delgado can relate to what Chris Colabello is going through in left field for the Toronto Blue Jays. Some Blue Jays fans might have forgotten that the club experimented with Delgado in left field for 58 games during the 1994 and 1995 seasons. Until that point, Delgado had been used exclusively as a catcher. Similarly, Colabello had played just 10 contests in left field in 11 minor league campaigns prior to this year. “It is really difficult [to move from the infield to left field],” said Delgado at the induction press conference yesterday. “Obviously Chris Colabello is swinging the bat very well. Ever since he got called up, he’s been swinging well and there’s a saying in baseball, they say, ‘They’ll find a place for you.’ And sometimes teams can sacrifice a little defence to get more offence, but moving to left field was tough. When you get those routine fly balls, it’s not a big deal, but when you get that line drive at you and you haven’t seen many of those, you don’t know which way to turn. So for me, it was hard, it was a lot of work. But in spring training [1994] I remember Cito Gaston came to me with the whole left field idea and . . . said, ‘Do you want to play left field in the big leagues or catch in triple-A?’ So we all know the answer to that question. Needless to say, from that moment on, I played every inning of every game in left field for the rest of spring training. There was extra work every day and still when I got out there I felt like I was on an empty island . . . but I have to thank Devon White. He was playing centre field at the time. And he’d say, ‘Kid, go this way or go that way.’”

• It was also interesting to hear Delgado, who eventually made close to $150 million during his 17-year big league career, reflect upon how financially strapped he was as a teenager with the class-A Short-Season St. Catharines Blue Jays in 1989 and 1990. “I remember the first year there we rented bikes. We didn’t make enough money to have a car. So we lived in town and we rode our bikes to the stadium,” he said. The cost of renting a bike the first year he was in St. Catharines was $25 a month, but the second year the person he was renting the bike from upped the price to $50 a month. “That was a big price hike when you were making $800 a month,” he said.

• There was nary a dry eye under the tent during the ceremony when Jim Fanning’s son Frank Fanning beautifully eulogized his father who passed away from a heart attack on April 25 at the age of 87. Frank spoke poignantly about his father’s accomplishments with the Montreal Expos, his love for coaching kids and his long friendship with 2015 inductee Felipe Alou. Fanning was supposed to introduce Alou at the ceremony. Frank told the crowd that speaking with Alou on Friday had been the closest he had felt to his father since his dad’s death. At the end of his eulogy, Frank put on his Expos cap and asked the crowd to think of his father when they wore their Expos caps.

• During his eulogy, Frank Fanning also revealed that his father was offered the New York Yankees manager’s job in 1982 and later the Minnesota Twins general manager’s position in 1985. He turned down both offers to remain with the Expos.

• Inductee Corey Koskie, who had his big league career cut short by a concussion, confirmed at the press conference on Saturday that he had been in recent contact with his former Twins teammate Justin Morneau (New Westminster, B.C.), who’s sidelined again by concussion issues. Morneau, now with the Colorado Rockies, has battled concussion-related issues since colliding with Blue Jays shortstop John McDonald while attempting to break up a double play on July 7, 2010. He experienced the concussion symptoms again after making a diving play in a game against the Los Angeles Angels on May 13 and he has not played since.

• Koskie also revealed at the press conference that the Minnesota Twins’ nickname for fellow inductee Matt Stairs (Fredericton, N.B.) was “Softball Sammy.” “When he got up to the plate, he would swing as hard as he could,” said Koskie, “and it was fun to watch. It was just really fun to play against him because he didn’t get cheated.”

• Felipe Alou said that being inducted into the Canadian Baseball Hall of Fame made him feel more Canadian. “This is one of the greatest days in my baseball career. I had the chance to play with my two brothers [Jesus and Matty] on the same team. That’s something incredible. I managed my son [Moises] on two major league teams. But this is one of the greatest days. Before I felt that I was more French Canadian with the Expos . . . but right now, I have a feeling that I belong to the entire country of Canada because of this induction.”

• This week’s trivia question: After the Toronto Blue Jays signed Carlos Delgado as a 16-year-old catcher, he was assigned to the class-A Short Season St. Catharines Blue Jays in 1989. There he would serve in a back-up role to a Canadian catcher. Who was the Canadian catcher for the St. Catharines Blue Jays that season? Please provide your answer in the “Comments” section below. The first person to provide the correct answer will win a set of 2015 Canadian Baseball Hall of Fame inductee cards (five cards).

9 thoughts on “But What Do I Know? … Canadian Baseball Hall of Fame Induction Edition”