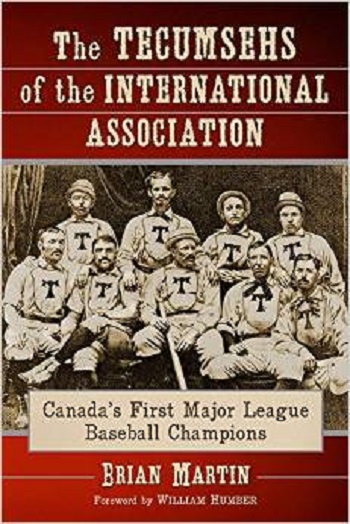 Tens of thousands spilled on to Yonge Street in Toronto where they hugged each other and broke into joyous renditions of the national anthem. Similar celebrations erupted in cities and towns across the country. The revelry was understandable given that the Blue Jays were the first Canadian squad to win a major league baseball championship.

Armed with the same tenacity and crackerjack research skills that made his 2013 page-turner, Baseball’s Creation Myth: Adam Ford, Abner Graves and the Cooperstown Story, one of the best and most important Canadian baseball books ever written, Martin delved into the archives in several towns and cities – including London, St. Marys, Pittsburgh, Cooperstown, Guelph, Petrolia and Wyoming – to complete his excellent, new book.

The author contends that when the London Tecumsehs won the International Association (IA) pennant in 1877 that it should be regarded as a major league title. Unfortunately, historians have relegated the IA to minor league status, despite the fact, as Martin notes, that it was once the National League’s main rival and supplied a blueprint for future professional circuits like the American Asssociation (1882 to 1891), Union Association (1884) and Players’ League (1890) – all of which are recognized as major leagues by historians.

To support his case, Martin, one of our country’s top investigative reporters (formerly with the London Free Press), describes in vivid and fascinating detail the construction of the IA and the Tecumsehs squad, and he shares that IA teams fared very well in exhibition contests against their supposedly superior National League (NL) rivals.

The colorful details that Martin is able to provide about the players and executives behind the Tecumsehs are one of the book’s biggest assets. For example, the author paints an absorbing picture of Jake Englehart, a somewhat shady, New York whiskey salesman who arrived in London in 1868 as a 20 year old and lived at the Tecumseh House Hotel. Englehart would soon shift his business interests and start a company that would become one of the most successful oil refiners in Canada. He was also, in large part, the money and brains behind the Tecumsehs.

By the early 1870s, London’s elite baseball organizations had amalgamated into the Tecumsehs, so all of the city’s best amateur players were suiting up on one team. Martin reveals that they played exhibition games against U.S. professional clubs that featured the likes of Cap Anson and Albert Spalding, but the amateur Tecumsehs’ main Canadian rival was George Sleeman’s Guelph Maple Leafs.

The Maple Leafs had won the Canadian championship in 1869 and by the early 1870s, Sleeman had begun recruiting U.S. professionals to ensure his team’s continued dominance. Tired of being defeated by the Maple Leafs, London, with Englehart’s financial backing, eventually followed Guelph’s lead and began signing pros from the U.S. in 1875. Pitcher Fred Goldsmith, outfielder Joe Hornung, catcher Phil Powers and later, infielder, Ross Barnes were the most notable Americans lured to London.

Wooed to the Forest City in 1876 by a contract that guaranteed him a $100 a month, the right-handed-throwing Goldsmith was one of the first – if not the first – pitchers to throw a curveball. Martin devotes chapter 15, one of the most interesting chapters in the book, to Goldsmith, who believed to his dying breath that he was the first to throw a curveball. The author also makes a strong argument that Goldsmith, who won 295 professional games, warrants a plaque in Cooperstown.

With the Tecumsehs and Maple Leafs competing in the newly formed Canadian Association of Base Ball Players in 1876, an estimated 9,000 fans showed up at the London Exhibition Grounds on Victoria Day to watch the Tecumsehs defeat the Maple Leafs 8-7 in 10 innings. It was the first time that London had beaten Guelph and the city rejoiced. The Tecumsehs would down the Maple Leafs in all four meetings that season and were eventually crowned league champions.

In 1877, the London and Guelph squads were looking to challenge themselves against stronger competition, so a Tecumsehs representative attended a convention in Pittsburgh that February about a new league called the International Association (IA) that would rival the National League (NL). Representatives from several U.S. cities that had been shut out of the NL – including Pittsburgh Allegheny, Rochester, Lynn Live Oaks, Manchester and Columbus – were also present and were convinced to join along with the two Canadian clubs.

Prior to the start of the IA season, the Tecumsehs added 22-year-old pitcher Foghorn Bradley, who had toed the rubber for the NL’s Boston Red Stockings the previous season and 24-year-old shortstop Ed Somerville, who suited up for the NL’s Louisville Grays in 1876, as well as American catcher Jake Knowdell and utility player Herm Doscher. Goldsmith, Hornung and Powers returned, while most of the remaining roster was filled out by local players.

The Tecumsehs had clearly out-recruited the Maple Leafs in 1877, even though were plenty of U.S. pros interested in playing for Guelph. In another fascinating segment in the book, Martin reveals the contents of some of the letters that U.S. professional players like Chick Fulmer and George Zettlein penned to Sleeman prior to that season to express their interest in suiting up for his new IA squad. The letters offer proof that the players, themselves, certainly didn’t view the IA as inferior to the National League.

When not battling IA teams that season, the Tecumsehs competed in several exhibition matches against NL squads, including one that they lost 8-7 in 10 innings to the eventual NL champion Boston Red Caps. This outcome reinforces Martin’s contention that the skill level of the IA clubs was virtually identical to that of the NL teams.

London’s main IA rivals turned out to be the Allegheny Pittsburgh club. Led by future National Baseball Hall of Fame hurler Pud Galvin, Allegheny had beaten London three times (the Tecumsehs had just one other loss in IA championship play that season), heading into the pennant-deciding game on October 2 at Tecumseh Park.

Martin relates that tragedy struck the Tecumsehs the day before when Somerville, their shortstop, died of “a hemorrhage of the lungs.” The club competed with heavy hearts and wore black on their uniforms in honour of their fallen teammate in the championship contest that pitted Goldsmith against Galvin. The Tecumsehs would beat Allegheny 5-2 to secure the pennant and become the first IA champs (though, as Martin describes, it would disputed by Allegheny for several months).

“After the game and on-field celebrations, the victors were entertained at the Tecumseh House Hotel by Tecumseh vice-president W.H. Birrell and his wife,” writes Martin. “Players received flowers and praise for bringing glory to the city.”

Unfortunately, Londoners’ love affair with the championship-winning squad was short-lived. The Tecumsehs started the 1878 season on a long road trip, which was hard on their pocket book and dampened fans’ enthusiasm for the club. It also didn’t help that the Tecumsehs were trounced 7-1 by an upstart Buffalo club on Victoria Day, their first home game after their lengthy road swing.

Despite compiling a won/loss record similar to their 1877 record, the Tecumseh saw their home attendance drop and rumors began to circulate that the team would disband. There were later suspicions that Goldsmith, their star pitcher, had accepted money to throw a game in July. When the Tecumsehs were eliminated from the pennant race with two losses to Utica on August 19 and 20, they opted to release their pro players, a move that essentially spelled the end for that professional incarnation of the Tecumsehs.

But the team’s quick demise shouldn’t dilute the historical significance of their 1877 IA championship. Throughout his book, Martin reiterates convincingly that the calibre of play in the IA was virtually equivalent to that in the NL. He points out that the Union Association (1884) and Players’ League (1890) – NL rivals which only lasted one season – are considered major leagues, while the IA is not. He also notes that when the American Association, also regarded as a major league by historians, started in 1882, it was in many ways “a revival of the old IA.”

“To this day, there is only one league still relegated to minor league status even though it attracted some of the top professionals of its day and nearly topped the National League: the International Association,” writes Martin.

And thanks to his tenacity, meticulous research and the rich details he’s able to provide, it’s hard not to agree that the IA has been unfairly relegated.

With The Tecumsehs of the International Association: Canada’s First Major League Baseball Champions, Martin has crafted another must-read for Canadian baseball and sports fans. And as a Londoner, he’s succeeded in summoning my civic pride, so much so that I feel like taking to the downtown streets in a celebration for my city’s long-forgotten, big league champs.

You can purchase The Tecumsehs of International Association: Canada’s First Major League Baseball Champions here. You can also purchase the book at the Canadian Baseball Hall of Fame in St. Marys, Ont., or at Oxford Books and Attic Books in London, Ont.