Roger Kahn, The Boys of Summer

It would be difficult to describe Joe Black’s major league career more accurately and eloquently than Kahn did in his acclaimed 1972 book about the Brooklyn Dodgers.

After toeing the rubber in the Negro Leagues for several seasons and spending the bulk of 1951 with the Dodgers’ Triple-A Montreal Royals, Black finally got his opportunity to pitch in the integrated big leagues in 1952 at the age of 28.

The 6-foot-2, 220-pound right-hander, who hailed from Plainfield, N.J., quickly became one of the best pitchers on the Dodgers staff. For the majority of the 1952 campaign, Black served as the Dodgers closer, racking up 15 saves, but the rookie hurler was so dominant that manager Chuck Dressen couldn’t resist starting him twice. Black won both starts, one of which was a complete-game victory late in the season.

With Black’s fastball and slider overpowering batters, Dressen opted to start him in the first game of the World Series against the New York Yankees that year. It proved to be a smart decision. Black outdueled Yankees ace Allie Reynolds and held the Bronx Bombers to two runs in a complete-game, 4-2 win.

With the Dodgers leading the series two games to one, Dressen summoned Black to start again in Game 4. Though almost equally masterful – allowing just one run in seven innings – the rookie righty was saddled with the loss when Reynolds tossed a shutout for the Yankees.

But Black’s sterling performance would earn him the start in the seventh-and-deciding game. Having served as a reliever in all but two games during the regular season, Black understandably showed signs of fatigue in his third start of the Fall Classic and was lifted after allowing three runs in 5-1/3 innings. The Dodgers eventually lost the game and the Yankees were once again World Champions.

Despite this disappointing end to the season, Black looked to be the Dodgers’ ace of the future. Though he made just two starts during the regular season, Black finished with 15 wins (good for sixth in the league) and a 2.15 ERA. For his efforts, he was named National League Rookie of the Year.

This was the kind of big league success that Black had dreamed of growing up in an integrated neighborhood in Plainfield, N.J. Black’s father was a mechanic who lost his job during the Depression, so his mother cooked and did laundry for other families to help make ends meet.

Black told Kahn that it wasn’t until he was 11 that he fell in love with baseball. He didn’t own a real baseball, so he taught himself to pitch with a sponge ball. As a kid, Black cut photos of Lou Gehrig, Met Ott, Paul Waner, Paul Derringer, Charlie Gehringer and Hank Greenberg out of the newspaper and glued them into a scrapbook.

At Plainfield High School, Black starred on the varsity basketball and football teams, but his heart was set on becoming a professional baseball player. But Kahn reports that despite Black’s obvious skills on the diamond, a big league scout ignored the talented teen and offered contracts to three of his teammates.

“Hey,” Black said to the scout, “how could you sign up all these guys and you don’t sign me?”

“What? You crazy? You’ve seen me playing for three years.”

“This is organized. We got a coach and uniforms.”

“I mean there’s no coloured in the Big Leagues.”

The conversation left Black devastated, and that night he went home and ripped apart his scrapbook, salvaging only one photo of Greenberg, whom he had come to particularly admire.

A strong student, Black accepted a scholarship to Morgan State University, a black liberal arts college in Baltimore. From 1943 to 1945, he fulfilled his military obligations in the army, but Black told Kahn that he served more as an athlete than as a soldier.

“Sixteen months after I was drafted before I touched a rifle,” he told Kahn. “I pitched a lot.”

Following World War II, Black signed with the Baltimore Elite Giants of the Negro National League and continued his studies. He was an effective pitcher in the Negro Leagues for several seasons, before he was spotted and signed by Dodgers scout Fresco Thompson in 1951.

“I pitched my greatest games in miserable ball parks, in the coloured league, with nobody watching,” Black once lamented.

After signing with the Dodgers, Black pitched nine games for their Triple-A affiliate in St. Paul in 1951, but he spent the bulk of that season with the Dodgers’ other Triple-A club in Montreal. In 26 games with the Royals, Black posted a 7-9 record and a 3.85 ERA.

In the spring of 1952, he impressed the Dodgers and cracked their big league roster in what would become a storybook season for him. Unfortunately, he was never able to replicate his 1952 success. In the spring of 1953, Dressen insisted that Black add a changeup to his arsenal. In his efforts to master the new pitch, he messed up his mechanics and damaged his confidence. His ERA ballooned to 5.33 in 34 contests and he lost his role as Dodgers’ closer.

Things got even worse in 1954 when Black posted a 11.57 ERA in five games with the Dodgers, before being demoted to Montreal. He seemed to find his form again north of the border, registering 12 wins and a respectable 3.60 ERA in 31 games with the Royals. 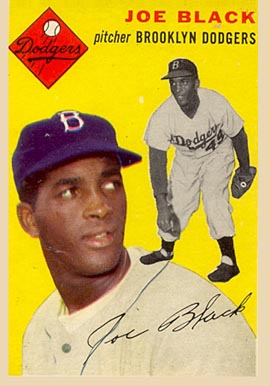 After starting 1955 with the Dodgers, he was dealt to the Cincinnati Reds on June 9, where he recorded five wins and a 4.22 ERA in 32 games. His era rose to 4.52 with the Reds the following year, before he finished his big league career with the Washington Senators in 1957.

At 33, Black opted to retire and go back to school. He attended Seton Hall and Rutgers to obtain his master’s degree and then taught at his old high school in Plainfield, before becoming vice-president of markets for the Greyhound Corporation in Chicago.

Black was active in the civil rights movement and served as an usher at Martin Luther King, Jr.’s funeral. Later in his life, Black was an official with the Baseball Assistance Team, an organization that provides financial help to former players and personnel in need. He also served as a consultant for Major League Baseball and worked in community relations for the Arizona Diamondbacks.

He died of prostate cancer on May 17, 2002 in Scottsdale, Ariz., leaving behind a son, Joseph, and daughter, Martha.

*This is the seventh article in my series about members of the 1954 Montreal Royals. You can read my articles about Roberto Clemente, Billy Harris, Don Thompson, Gino Cimoli,Chico Fernandez and Glenn Cox by  clicking on their names.