But What Do I Know? … Justin Morneau, Phillippe Aumont, Montreal Expos 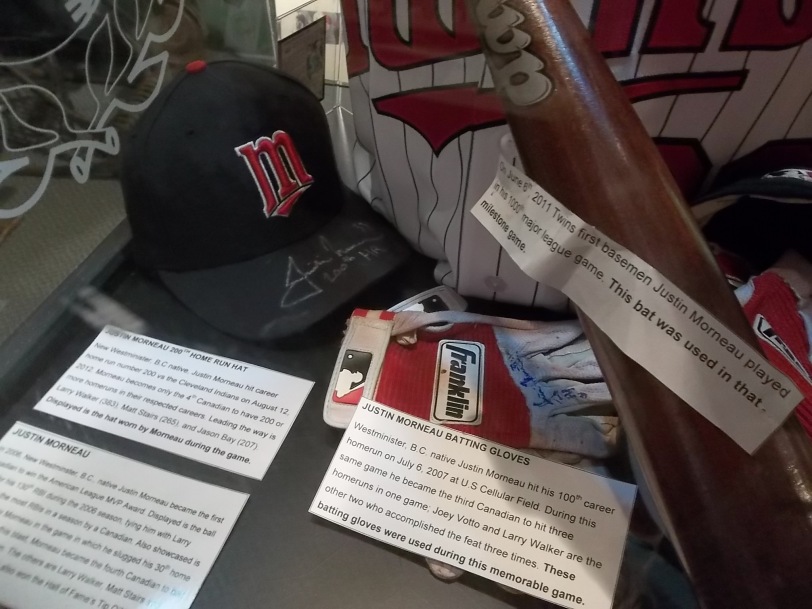 My weekly opinions, observations and rants about some Canadian baseball stories (Please follow me on Twitter: @kevinglewsports):

 The Canadian Baseball Hall of Fame in St. Marys, Ont., has added two exciting, new artifacts. New Westminster, B.C., native Justin Morneau has donated the cap (pictured above) he wore in the August 6th game against the Cleveland Indians in which he belted his 200th career homer. While the pride of Gatineau, Que., Phillippe Aumont forwarded the Philadelphia Phillies cap (pictured below) he wore in his big league debut on August 23.

 It’s been a miserable season for Jason Bay with the New York Mets, but in the first inning of Sunday’s game against the Miami Marlins, the Trail, B.C., native socked his fifth career grand slam. With that homer, he now possesses the fourth-most big league grand slams by a Canadian. Prior to that four-bagger, he was tied with Russell Martin (Montreal, Que.), George Selkirk (Huntsville, Ont.) and Jeff Heath (Fort William, Ont.) who have socked four bases-loaded blasts each, according to a list compiled by veteran Canadian baseball statistician Neil Munro. Saint John, N.B., native Matt Stairs has the most career grand slams by a Canadian with 12, followed by Larry Walker (Maple Ridge, B.C.) and Morneau who have belted seven and six respectively.

 Just how bad has Toronto Blue Jays second baseman Kelly Johnson been this season? Well, on top being on pace to set the Jays’ single-season record for most strikeouts, his slugging percentage (.362) is lower than that of the light-hitting John McDonald (.423). And Johnny Mac was more less a throw in, in the trade that saw the Jays ship Aaron Hill to Arizona for Johnson on August 23, 2011. For the record, Hill owns a .500 slugging percentage and leads National League second baseman in almost every offensive category this season.

 In another excellent article for the Canadian Baseball Network, veteran statistician Neil Munro was able to uncover that 46 home runs have been hit by Canadian big league hitters off of Canadian pitchers. This has actually happened four times this season. Morneau and George Kottaras (Scarborough, Ont.) have gone deep off of Ryan Dempster (Gibsons, B.C.), while Joey Votto (Etobicoke, Ont.) and Martin have homered off of Scott Diamond (Guelph, Ont.) and Jesse Crain (Toronto, Ont.) respectively. For a complete list, follow this link: http://www.canadianbaseballnetwork.com/articles/morneau-deep-off-canuck-dempster-its-been-done-before/

 I was sad to hear that former Montreal Royal and Toronto Maple Leaf Ed Stevens passed away at the age of 87 on July 22. Best known as the player whom Jackie Robinson replaced at first baseman for the Brooklyn Dodgers in 1947, Stevens spent parts of six seasons in the big leagues with the Dodgers and Pittsburgh Pirates. His greatest professional success, however, came during his tenures with the Montreal Royals (1944 and 1945) and Toronto Maple Leafs (1952 to 1956). “Big Ed” – as he was affectionately nicknamed – drove  in more than 90 runs in five of the seven seasons that he played on Canadian soil.

 And finally, here’s some video footage of the 200 or so Expos fans that made the trek to the Rogers Centre on Sunday to send a message that Montreal is still passionate about baseball. At the 1:59 mark of the video, former Expos manager Jim Fanning visits and is greeted with a standing ovation: http://www.youtube.com/watch?v=XpElIsZIf0A

8 thoughts on “But What Do I Know? … Justin Morneau, Phillippe Aumont, Montreal Expos”