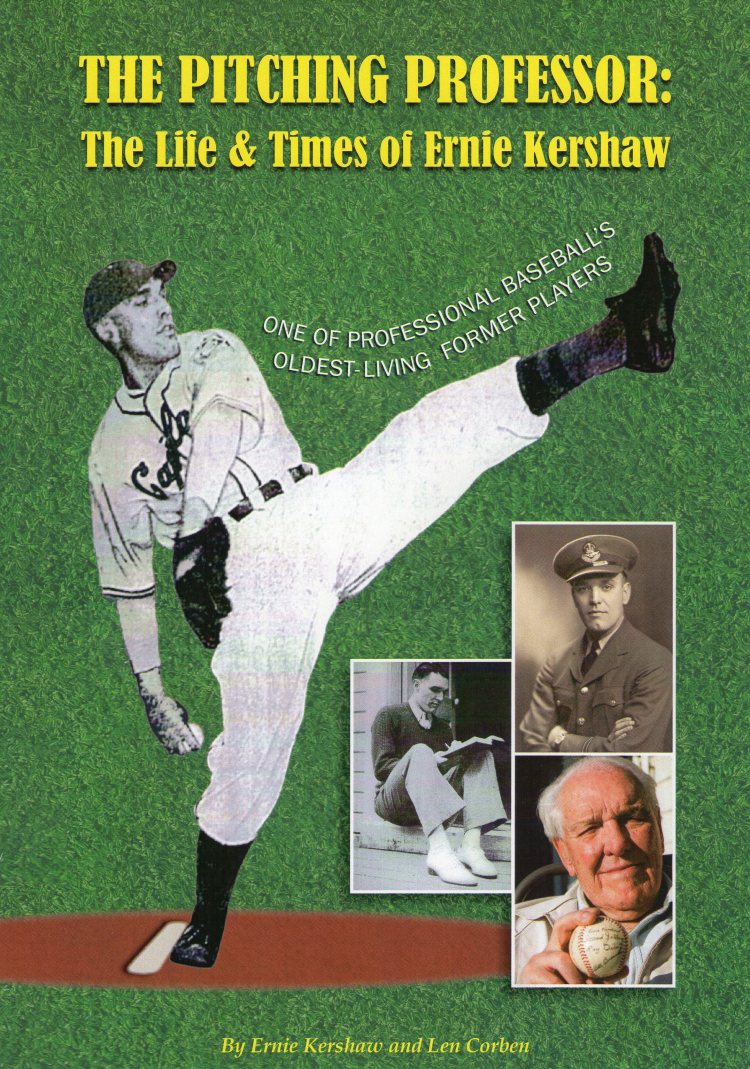 Here’s some information on what sounds like a fascinating new book about British Columbia baseball legend Ernie Kershaw. The book is written by Vancouver sports researcher and historian Len Corben.

Information on how to order the book can be found at the end of this blog entry. I’ve already ordered my copy.

There are very few books published about baseball in Vancouver, in British Columbia or even in the Pacific Northwest. This book, fresh off the press in August 2012, is one of the few. Baseball fans will love it, taking the reader back to ball games played during the Great Depression and to the World War II years.

Ernie Kershaw played ball a long time ago… long before B.C. produced Jason Bay of Trail, Ryan Dempster of Gibsons, Jeff Francis of Delta, Brett Lawrie of Langley, Rich Harden of Victoria or Justin Morneau of New Westminster, among others… And, yes, long before Larry Walker of Maple Ridge and even well before Ted Bowsfield of Penticton, the “Yankee killer” who beat New York’s 1958 World Series champions three times during his rookie season with the Red Sox.

We’re talking the 1930s and 1940s when Kershaw was a star hurler in Vancouver. Even then British Columbia was a hot bed of baseball on the West Coast.

Kershaw was “The Pitching Professor,” a longtime West Vancouver High math teacher and a clever right-hander whose mound repertoire was described by Vancouver Sun sportswriter Hal Straight as featuring “Curves, he has more than the Cariboo Highway.”

The old Vancouver Senior City League in the ’30s and ’40s was supposedly an amateur circuit, though the better players were paid with wads of money they’d sometimes find stuffed in their shoes. The league operated out of old Athletic Park under Vancouver’s popular “Mr. Baseball” Bob Brown. Many of the players came from U.S. colleges to play all summer. Some came directly down from the Pacific Coast League, baseball’s top minor league.

Kershaw was born in Ladner, B.C. and pitched in some very memorable games in the Vancouver Senior City League. In the book, he recalls tales of the real characters in that league, people like Coley Hall, Johnny Nestman, Ernie Paepke, Wimpy Quinn, Norm Trasolini, Jimmy Watters and others you may never have heard of but who provided fans with great entertainment with their stellar play and quirky antics.

One of Ernie’s biggest games was winning his pro debut in 1939 as a 29-year-old rookie. It came in the inaugural home opener of the Vancouver Capilanos in the class-B Western International League, a five-hit, 4-0 shutout over Yakima Pippins. However, as historic as that was, perhaps his biggest accomplishment was beating the Pacific Coast League’s league-leading Seattle Rainiers 5-3 during an exhibition game organized as a fund-raiser for the war effort in 1940. Ernie was so loved by the fans that an “Ernie Kershaw Night” was held for him in 1941 when he left to do duty with the RCAF.

Ernie just died in February 2012 at the age of 102, making him one of the very oldest-living former professional baseball players. As Ernie lay on his deathbed shortly before passing away, his son said, “Dad, I guess this is the bottom of the ninth for you.” Ernie, in reply and humorously summing up his long life, quipped, “It’s more like the bottom of the 12th.”

Kershaw wrote the book with Len Corben, one of the premier sports researchers and historians in Greater Vancouver and whose special passion is baseball. He has written stories for numerous publications. His Corben’s Corner sports column appeared in the North Shore Citizen in the 1960s and ’70s and his Instant Replay sports history column has been featured in the North Shore Outlook since 1999. He’s also written a book called Instant Replay: A Century of North Shore Sports Stories.

THE PITCHING PROFESSOR: The Life and Times of Ernie Kershaw, One of Professional Baseball’s Oldest-Living Former Players ($24.95) is 184 pages and includes 135 photos, many from Kershaw’s own scrapbook and from the vast collection of Seattle’s David Eskenazi who has amassed one of the West Coast’s best collections of baseball memorabilia.

To order a copy of the book (which has been printed in a very limited quantity), or for more information, contact Len Corben at (604) 988-0455 or by e-mail at lencorben@yahoo.ca.