But What Do I Know? . . . Roy Halladay, Mariano Rivera, Mike Soroka, Pumpsie Green 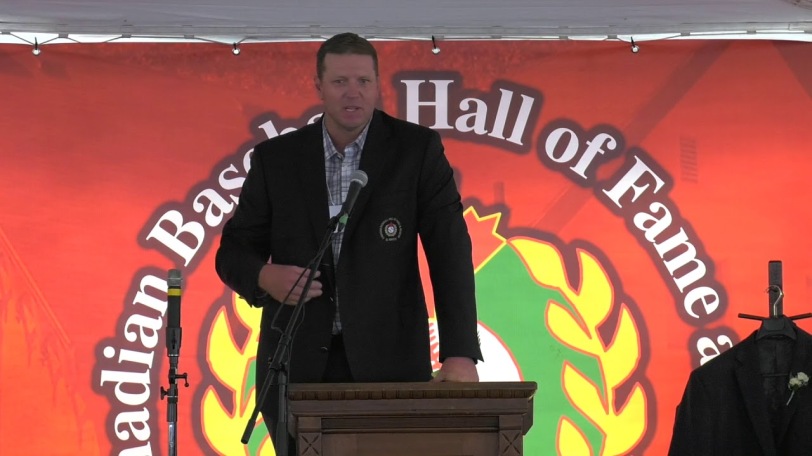 ·         Mariano Rivera, the late Roy Halladay, Edgar Martinez, Mike Mussina, Lee Smith and Harold Baines will be inducted into the National Baseball Hall of Fame this afternoon in Cooperstown. It’s a bittersweet day for Toronto Blue Jays fans who will celebrate the memory of their franchise’s first homegrown Cooperstowner, who died in a plane crash on November 7, 2017. Canadian Baseball Network editor-in-chief Bob Elliott was able to obtain a copy of a scouting report the Blue Jays wrote about Halladay on April 27, 1995, just prior to the draft that year. You can view that report here. The report is not overwhelmingly positive. At the time, Halladay’s only above average pitch was his fastball. “Release point is inconsistent and control is below average. Slows at times with his breaking ball. And does not always finish this pitch off. Lacks good feel,” reads one portion of the report. The scout does, however, praise Halladay’s dedication, instincts and competitiveness and concludes that he “would consider this kid in the late first round.” And it’s a good thing that the Blue Jays did. They selected him 17th overall that year and he developed into arguably the greatest pitcher in franchise history. Halladay’s widow, Brandy, will speak at the induction ceremony today. Among those that will be in attendance will be Canadian Baseball Hall of Fame inductees Paul Quantrill (Port Hope, Ont.), Pat Hentgen, Gord Ash (Toronto, Ont.) and Pat Gillick, as well as Canadian ball hall director of operations Scott Crawford. 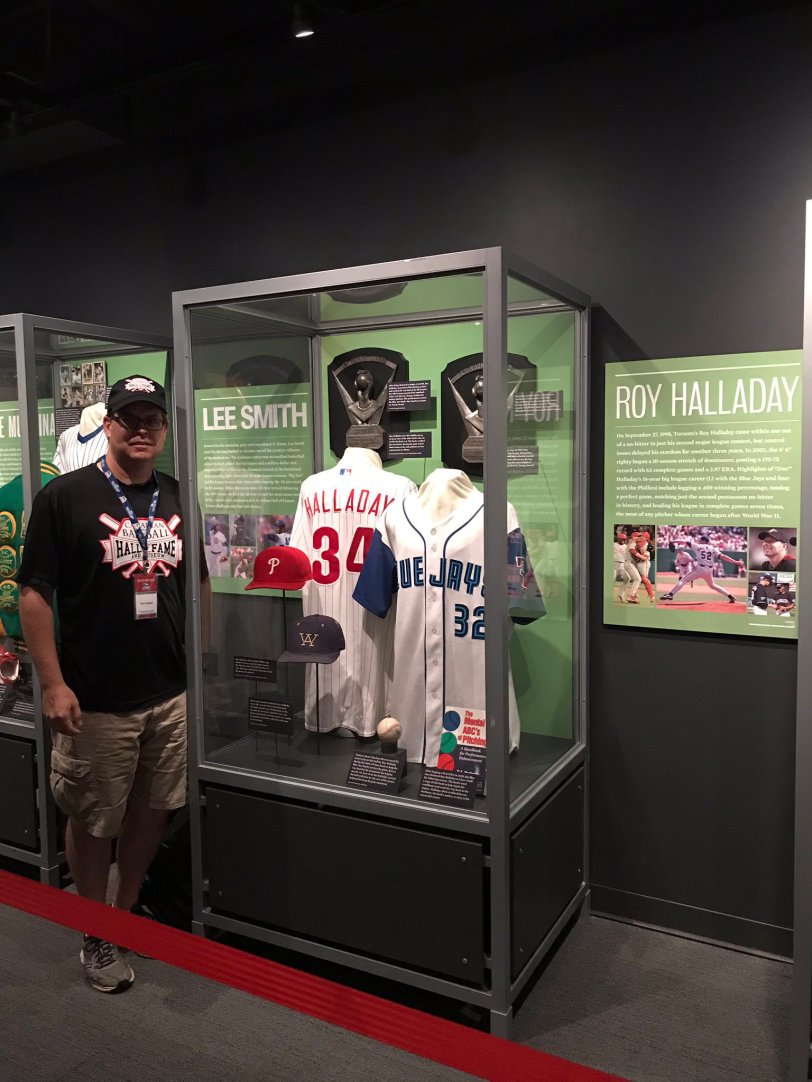 ·         So who was the first major leaguer to homer off Halladay in a regular season game? The answer is Toronto’s own Rich Butler. On September 20, 1998, Halladay made his debut with the Blue Jays against the Tampa Bay Devil Rays at Tropicana Field. In the bottom of the fourth inning, Butler belted a two-run shot off Halladay in that contest that the Blue Jays eventually won 7-5. In total in five innings that day, Halladay allowed three runs (two earned) on eight hits and struck out five. 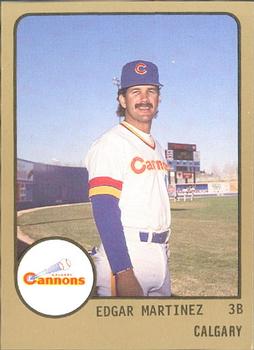 ·         And if major league pitchers were looking for advice on how to get Martinez out, Baseball Canada president and Miramichi, N.B., native Jason Dickson, who pitched for parts of four major league campaigns with the California Angels, might have been a good person to ask. Martinez was just 1-for-13 (.077 batting average) off Dickson. At the Baseball Canada banquet in January, I asked Dickson if he remembered his success against Martinez, but the Canadian doesn’t recall many easy at bats versus the legendary DH. “Somebody asked me one time about who was the toughest hitter I ever faced and for me the hardest guy I ever faced was Edgar Martinez,” said Dickson. “So then they brought up the fact that he was 1-for-13 against me and I said, ‘Well, the problem is you can’t really see what that 1-for-13 looked like.’ In my mind I can remember some balls that were scorched, obviously they got caught, but I don’t think I ever tricked him with anything. I may have been successful getting him out, but it seemed like he hit everything hard. He hit hard stuff. He hit soft stuff — in, out, up, down . . . That guy could hit.”

·         Back in January when it was announced that former Baltimore Orioles and New York Yankees ace Mike Mussina had been elected to the National Baseball Hall of Fame, Jerry Soulliere shared with me that Mussina pitched for the U.S. at the Junior World Championship tournament in Windsor in 1986. Cuba won gold at that competition, but their only loss was a defeat to the U.S. in which Mussina struck out 16 batters in a five-hit shutout. The U.S. ended up winning bronze. The Canadian team, which finished fourth, featured future big leaguers Matt Stairs (Fredericton, N.B.), Denis Boucher (Lachine, Que.) and Greg O’Halloran (Toronto, Ont.).

·         Speaking of pitching well against the Blue Jays, 2019 inductee Mariano Rivera did just that. In 41 career appearances against the Blue Jays, spanning 46 innings, he had 44 strikeouts and just five walks, while posting a 1.76 ERA and recording 28 saves. When I posted this stat line on Twitter in January, Blue Jays fans were quick to remind me of the walk-off home run Vernon Wells hit off Rivera at Rogers Centre on July 20, 2006.  Click on the link below for video evidence.

·         The best batting average that 2019 Hall of Fame inductee Harold Baines recorded at any major league park (in which he had at least 50 at bats) was Toronto’s SkyDome. In 58 contests against the Blue Jays at the Dome, Baines batted .325 with eight home runs and six doubles. He also hit .303 with nine home runs in 52 contests at Exhibition Stadium and .412 (7-for-17) against the Montreal Expos.

·         Most baseball pundits have likely forgotten that long-time closer Lee Smith, who will also be inducted into the National Baseball Hall of Fame today, recorded the final five of his 478 career saves with the Expos in 1997. The intimidating right-hander registered his last major league save on June 10, 1997 at Olympic Stadium when he tossed a scoreless ninth inning against the Philadelphia Phillies in an 8-5 win. The first batter he retired in that inning was Toronto native Rob Butler on a ground ball to second base. Smith’s last major league appearance came July 2 that year at SkyDome when he hurled two scoreless innings for the Expos against the Blue Jays in his club’s 7-6, 13-inning loss.

·         In non-Cooperstown news:  In case you missed it, the Atlanta Braves started right-hander Mike Soroka (Calgary, Alta.) against San Diego Padres righty Cal Quantrill (Port Hope, Ont.) last Sunday at Petco Park. The Braves eventually prevailed 4-1 but neither Canuck starter allowed a run. Soroka hurled seven shutout innings and Quantrill tossed six. This got me wondering if two Canadian starting pitchers had ever thrown that many combined scoreless innings in a major league game. To attempt to get an answer, I emailed baseball historian and research whiz David Matchett and he wasn’t 100 per cent sure. But between his research and mine, it appears that the 13 scoreless innings that Soroka and Quantrill tossed in last Sunday’s game is the greatest combined pitching performance by two Canadian starting pitchers in a major league game.

·         The Philadelphia Phillies announced on Friday that they were moving Victoria, B.C., native Nick Pivetta to the bullpen. The Canuck right-hander will be replaced in the rotation by recently signed left-hander Drew Smyly. The hard-throwing Pivetta has been inconsistent as a starter this season, going 4-4 with a 5.73 ERA in 69 innings in 13 starts. He allowed one run in two innings in his first 2019 relief appearance on Saturday. The 26-year-old is now in his third season with the Phillies. After posting an 8-10 record with 140 strikeouts in 133 innings in 26 starts in 2017, he followed that up by fanning 188 batters in 164 innings and lowering his earned run average to 4.77 in 32 starts last season.

·         Maple Ridge, B.C., native Tyler O’Neill has been red hot for the St. Louis Cardinals. He had a seven-game hitting streak snapped yesterday, but the right-handed hitting slugger has gone 13-for-31 (.419 batting average) with four home runs and 12 RBIs in his last eight games. Since the beginning of this stretch, he has raised his batting average from .271 to .303 and his slugging percentage from .414 to .505. He has to be a strong candidate for National League Player of the Week honours.

·         I was sad to learn that Pumpsie Green, who became the first black player in Boston Red Sox history in 1959, passed away on Wednesday at the age of 85. Prior to his five-year major league career that also included a stop with the Mets, the Oklahoma-born infielder honed his skills with the Western Canadian League’s Medicine Hat Mohawks in 1951. Below is a team photo of that Medicine Hat squad courtesy of the excellent Western Canada Baseball site run by Jay-Dell Mah. Green is on the far right in the bottom row.

·         This week’s trivia question: Three National Baseball Hall of Fame inductees served as the Montreal Expos hitting coach at different times during the team’s 36-season existence. Can you name one of them? The first person to provide the correct answer will win a 1984 Donruss Tim Raines card, a 1984 Topps Traded Jimmy Key rookie card, a 1985 Leaf Andre Dawson card and a 1988 Donruss Roberto Alomar rookie card.

·         The answer to last week’s trivia question (Who is the only player that has represented both the Montreal Expos and Toronto Blue Jays in the MLB All-Star Game?) was Ron Fairly, who represented the Expos in 1973 and the Blue Jays in 1977.

11 thoughts on “But What Do I Know? . . . Roy Halladay, Mariano Rivera, Mike Soroka, Pumpsie Green”