·         Congratulations to Calgary, Alta., native Mike Soroka who has been named to the National League All-Star team. With his selection, he becomes the third Canadian to be named to the All-Star team in their rookie season, joining Jason Dickson (Miramichi, N.B.) in 1997 and Jeff Zimmerman (Kelowna, B.C.) in 1999. Soroka boasts a 9-1 record with a 2.42 ERA in 89 1/3 innings in 15 starts for the Atlanta Braves this season.

·         When I used to give tours at the Canadian Baseball Hall of Fame, people would sometimes stop at the large photo of inductee Jeff Heath and ask how good he was. I used to tell them that in 1941, Joe DiMaggio had his 56-game hitting streak and Ted Williams batted .406 (the last time any player ever hit .400 in a major league season) and the starting outfield for the American League in the All-Star Game that year was DiMaggio, Williams and Heath. That’s how good Heath was. The Canadian slugger, who was born in Fort William, Ont. (now part of Thunder Bay), batted .340 with 24 home runs and 123 RBIs in 151 games in 1941.

·         The first Canadian ever selected to the MLB All-Star Game was Huntsville, Ont., native and Canadian Baseball Hall of Fame inductee George Selkirk. The Yankees outfielder, who wore No. 3 and replaced Babe Ruth in right field, was selected for the 1936 contest. In that game, played on July 7, 1936 at Braves Field in Boston, Selkirk pinch hit for pitcher Schoolboy Rowe in the top of the seventh inning and walked in his only at bat. In 137 games that season, Selkirk batted .308 with 18 home runs and 107 RBIs. He also had 94 walks and an on-base percentage of .420. It was the first of two all-star selections for Selkirk. He was also an all-star in 1939.

·         Three Canadians – Ryan Dempster (Gibsons, B.C.), Justin Morneau (New Westminster, B.C.) and Russell Martin (Montreal, Que.) – were selected for the 2008 Midsummer Classic. This represents the highest number of Canucks ever chosen. Played on July 15, 2008 at Yankee Stadium, the American League eventually prevailed 4-3 in 15 innings. Morneau scored the game-winning run on a sacrifice fly from Michael Young in the bottom of the 15th inning. Morneau had led off with a single off of Philadelphia Phillies closer Brad Lidge in that inning. It was Morneau’s second hit and second run in the contest. His game-winning run capped off an exceptional two days for Morneau who had won the Home Run Derby the day before (the only Canadian to do so). Dempster also impressed for the National League squad during the contest. He struck out the side (Ian Kinsler, Dioner Navarro and J.D. Drew) in the ninth inning. Martin also had a single in three at bats for the National Leaguers.

·         Canadian Baseball Hall of Famer Fergie Jenkins (Chatham, Ont.) was selected to three All-Star games and his most impressive outing came in the 1967 contest at Anaheim Stadium when he tied an All-Star Game record by striking out six batters in his three innings for the National League squad. Among the players Jenkins fanned in that game were Hall of Famers Mickey Mantle, Harmon Killebrew and Rod Carew. The National League won the game 2-1 in 15 innings.

·         One of my favourite baseball card sets is the 1991 Upper Deck Final Edition series because it includes a subset of cards picturing players at the 1991 MLB All-Star Game that was played at SkyDome. It’s the only time the game has been played in Toronto. My favourite card of the bunch (shown above) pictures eight-time National League batting champ Tony Gwynn signing autographs before the game. It’s how I like to remember the Padres outfielder who passed away from salivary gland cancer in 2014. The American League defeated the National League 4-2 in the game which took place on July 9, 1991. Fittingly, the winning pitcher was Blue Jays left-hander Jimmy Key, while Expos right-hander and Canadian Baseball Hall of Fame inductee Dennis Martinez was saddled with the loss after allowing three runs in two innings. Canadian Baseball Hall of Fame inductee Andre Dawson homered for the National League, while fellow Canadian Baseball Hall of Famers George Bell (National League), Joe Carter (American League) and Roberto Alomar (American League) also appeared in the contest. By my count, 20 players that were included on the All-Star rosters from this game have been elected to the National Baseball Hall of Fame in Cooperstown.

·         Happy Birthday to Vancouver native and ex-big league pitcher R.J. Swindle! He will turn 36 on Sunday. Selected by the Boston Red Sox in the 14th round of the 2004 MLB draft, the 6-foot-3 left-hander pitched parts of two seasons in the big leagues with the Philadelphia Phillies (2008) and Milwaukee Brewers (2009). In total, he toed the rubber for parts of nine professional seasons in the Red Sox, Yankees, Phillies, Indians, Brewers, Rays and Cardinals organizations. He also pitched for Canada at the 2008 Olympics. 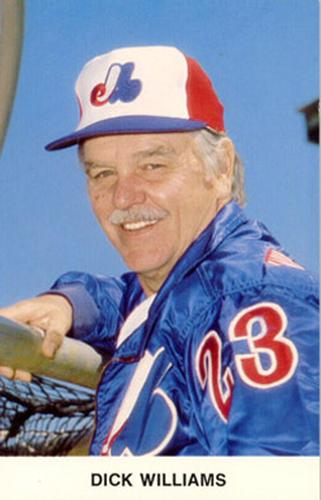 ·         Please take a moment to remember former Montreal Expos manager Dick Williams who passed away eight years ago this Sunday at the age of 82. Prior to his managerial career, Williams played parts of 13 seasons in the majors. He also made minor league stops with the International League’s Montreal Royals as a player in 1953 and 1956. Following his playing career, he managed the Boston Red Sox triple-A affiliate Toronto Maple Leafs to back-to-back league titles in 1965 and 1966. This earned him a promotion to manage the big league Red Sox in 1967 and he piloted them to an American League pennant. The 2008 National Baseball Hall of Fame inductee would also manage the Oakland A’s to two World Series titles (1972, 1973). He followed that up with a three-year tenure as the California Angels manager before becoming the Expos’ bench boss from 1977 to September 1981. During his tenure with the Expos, the team finished in second place in 1979 and 1980, narrowly missing the playoffs in each year.

·         This week’s trivia question: What Canadian player has been selected to the most MLB All-Star games (among Canadian players)? Please provide your answer in the “Comments” section below. The first person to provide the correct answer will win a 2019 Canadian Baseball Hall of Fame induction program.