But What Do I Know? . . . Joey Votto, Paul Hodgson, Pete Rose, Andrew Albers 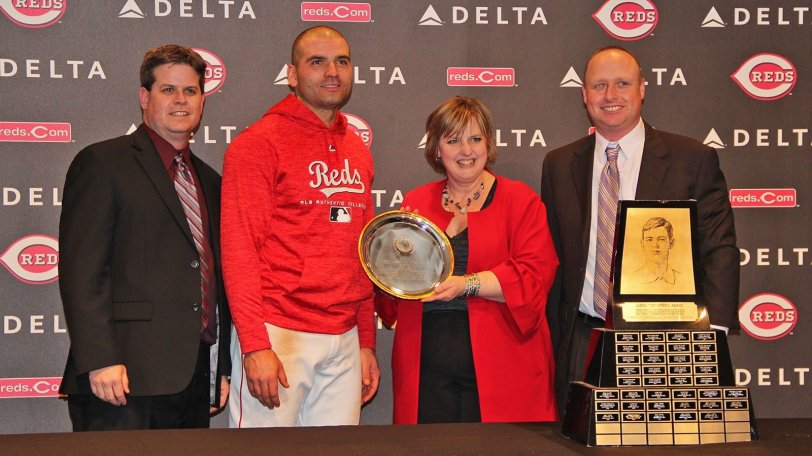 A team of representatives from the Canadian Baseball Hall of Fame presented Joey Votto (Etobicoke, Ont.) with the Hall’s Tip O’Neill Award prior to the Cincinnati Reds game at Great American Ballpark on Friday. To read more about the award, you can follow this link. From left to right in the photo: Scott Crawford, Hall’s director of operations; Votto; Tammy Adkin, Hall board member and Scott Walsh, long-time Hall volunteer. Photo Credit: Canadian Baseball Hall of Fame/Cincinnati Reds.

·         Happy 58th Birthday to Paul Hodgson, who was the second Canadian to play for the Toronto Blue Jays. The Marysville, N.B., native was the first right-handed hitting Canuck to belt a home run for the Blue Jays. After signing with the Blue Jays on his 17th birthday in 1977, the 6-foot-2, 190-pound slugger was impressive with club affiliates in Utica, Medicine Hat and Dunedin, before really catching fire in class-A Kinston in 1980, where he hit .352 with seven homers in 60 games to earn his first big league call-up. In his first major league start on August 31, 1980, Hodgson served as the DH and batted sixth against veteran Minnesota Twins lefty Jerry Koosman and registered a walk and a run. The following day, Hodgson would single to centre field in the ninth inning off of Texas Rangers right-hander Doc Medich to record his first big league hit. Eighteen days later, he smacked his first homer in the majors. It came with one out in the sixth inning off of Canadian Baseball Hall of Famer and Baltimore Orioles right-hander Dennis Martinez at Memorial Stadium. “It was Martinez’s big curve that he was known for, but he hung it out over the plate,” recalled Hodgson in a 2012 interview. “I was using a black Louisville Slugger P72 at the time, 34-1/2 inches, 32 ounces. I thought the ball landed out near the bullpen, but I wasn’t sure, and I sure as heck wasn’t watching it. When I came into the locker room after the game, the ball was sitting on my chair. Jack Kucek, one of our relievers, had scaled the wall into the Orioles’ bullpen and found the ball for me. It had gone over their bullpen and into an open area. Jack was a great guy and I was thrilled he had done that. The clubbie had written the particulars on it.” That ball now resides in the New Brunswick Sports Hall of Fame. Hodgson was on track to crack the big league roster the following spring when he injured his right shoulder. After he got hurt, the Jays moved him to first base. From 1981 to 1983, Hodgson toiled in double-A Knoxville for three seasons, but with his son being born, he decided to return to New Brunswick in 1984. Montreal Expos GM and Canadian Baseball Hall of Fame inductee Murray Cook (Sackville, N.B.) convinced him to attend spring training in 1985, but when his shoulder began bothering him again, Hodgson retired for good. Following his pro career, he went back to Fredericton where he eventually landed a job in the news department at the local CBC TV station. After more than a decade with CBC, he left in 1996 and has since worked as a correctional officer, as a service representative in the aviation industry and as an IT consultant. He now resides in Toronto.

·         It was 49 years ago today that the Montreal Expos played their first home game. Led by Mack Jones, who belted a three-run home run and a two-run triple, the Expos beat the St. Louis Cardinals 8-7 in front of 29,184 fans in a Monday afternoon contest at Jarry Park. Left-hander Dan McGinn tossed 5-1/3 shutout innings in relief of starter Larry Jaster to record the win. Canadian Baseball Hall of Famer Rusty Staub also had two hits and two runs for the Expos. Among the stars in the Cardinals’ lineup were Hall of Famers Lou Brock and Joe Torre. You can watch some footage of the game belwo.

·         Happy 77th Birthday to former Expo Pete Rose! Most American fans forget that Charlie Hustle posted a .259 batting average in 95 games for the Expos in 1984 after the club inked him to a one-year, $500,000 contract (plus bonuses). His most memorable moment as an Expo came when he recorded his 4,000th career hit. Batting leadoff and playing left field for the Expos on April 13, 1984, Rose doubled into the right field corner at Olympic Stadium off of Philadelphia Phillies left-hander Jerry Koosman in the bottom of the fourth inning to notch his milestone hit. The Canadian Baseball Hall of Fame has one of Rose’s batting gloves from the historic hit in their collection.

·         George Farelli of the Canadian Baseball Network, reports that Andrew Albers (North Battleford, Sask.) is off to an excellent start with the Orix Buffaloes of the Japanase Pacific League. Despite an excellent 2017 season that saw him post a 5-1 record and a 3.51 ERA in nine appearances with the Seattle Mariners, the Canadian southpaw elected to head overseas. In his first start in Japan on April 4, he allowed just one run on three hits, while striking out eight, in six innings to lead his club to a 7-1 win over the Lotte Mariners. According to Farelli’s records, with that appearance, Albers became just the eighth Canadian to pitch in the Japanese League.

·         If someone asked you to rhyme off a list of Opening Day pitchers for the Toronto Blue Jays over the years, this pitcher would probably be the last one you would name. Ex-Jays hurler Mark Bomback, who turns 65 today, started the 1982 season opener for the Blue Jays and the assignment wasn’t completely unwarranted. He had  registered a 3.89 ERA in 20 appearances for a dismal Blue Jays team in 1981. Unfortunately, the Milwaukee Brewers, led by Hall of Famers Paul Molitor and Robin Yount, hit him  around during that April 9, 1982 start in which the thermometer reached only five degrees Celsius at Exhibition Stadium. Bomback failed to get out of the first inning, allowing six runs on six hits and he recorded only one out. The Blue Jays lost 15-4. He would make just 15 more appearances with the Blue Jays, finishing with a 1-5 record and a 6.03 ERA that campaign, which would be his last in the majors.

·         This week’s trivia question: As noted earlier, Paul Hodgson was the first Canadian right-handed hitter to sock a home run for the Blue Jays. Who was the second Canadian right-handed hitter to belt a home run for the Blue Jays in a regular season game? (Please note: Vancouver native Dave McKay was a switch hitter, so I’m not counting him). Please provide your answer in the “Comments” section below. The first person to provide the correct answer will win a 1963 Topps Curt Simmons card, a 1979 Topps Willie McCovey card, a 1984 Topps Nolan Ryan card and a 1990 O-Pee-Chee Bernie Williams rookie card.

·         The answer to last week’s trivia question (Canadian outfielder Michael Saunders (Victoria, B.C.) signed a minor league deal with the Baltimore Orioles. Who was the last Canadian to play in the outfield in a regular season game for the Orioles?) was Adam Stern (London, Ont.) who played two games for the Orioles in 2007.