It would’ve been understandable if Kevin Reimer was too exhausted to savour the fact that he had just made Canadian baseball history.

After all, on August 24, 1993, when the left-handed hitting slugger became the first and only Canadian to record six hits in a major league game, he accomplished this in a grueling, extra-inning affair that was interrupted by a brawl. It was also the second game of a doubleheader between Reimer’s Milwaukee Brewers and the Oakland A’s, and the 6-foot-2, 215-pound Canuck had also started the opener.

But Reimer, now semi-retired and running a part-time taxidermy business in Enderby, B.C., doesn’t recall feeling particularly tired that day. In fact in April, when he was contacted to talk about his record-breaking performance, he sheepishly admitted that he didn’t remember much about the game at all.

To refresh Reimer’s memory, he went 6-for-6 in that contest, rapping out four singles, two doubles and scoring four runs. And A’s reliever Kelly Downs deprived Reimer of a chance for seven hits when he walked him intentionally in the 11th inning.

Fittingly, Reimer’s sixth hit initiated a rally in the bottom of the 13th inning and he eventually scored the winning run when catcher Dave Nilsson singled with two outs to give the Brewers a 7-6 victory at County Stadium.

“I knew I was having a decent day,” noted Reimer in a phone interview in April. “And the A’s were just one of those teams that I had some success off of. They had been such a great team, so maybe I was more focused against them. I don’t know what it was.”

Not surprisingly for a gritty, hardnosed player from a hockey-loving country, some of Reimer’s most vivid memories of the contest are of the brawl which erupted after the Brewers tied the score 6-6 in the bottom of the ninth inning. The brouhaha broke out after A’s closer Dennis Eckersley and manager Tony La Russa were ejected for arguing balls and strikes with home plate umpire Dale Scott and Brewers manager Phil Garner yelled something at La Russa, inspiring both benches to empty.

“I just remember Mark McGwire was already out of the game and he wasn’t playing that night and McGwire and B.J. were buddies,” said Reimer. “And McGwire came out there and he’s just such a monster of a man that he just scared the hell out of everybody. As soon as he came out, it kind of settled everybody down. I was just doing the hockey thing and I had grabbed on to somebody’s uniform and was just hanging on for the eight-second ride myself.”

By that time, Reimer had already accumulated five hits  and the A’s were likely hoping that he would somehow be ejected. His first three hits were singles in the second, fourth and fifth innings off of 1990 American League Cy Young Award winner Bob Welch, while his fourth was a double in the seventh inning off of Hall of Famer Goose Gossage.

“Goose was a teammate of mine from the Rangers [earlier in his career],” recalled Reimer. “I hit the first pitch he threw to me. I guess it was just one of those days when everything was just clicking and everything people threw up there I was just seeing really well. It got to the point late in the game that I wasn’t even waiting for a good pitch. I was swinging at anything that came up there. Goose was busting my chops after the game, because he said, ‘At least show me some respect and look at a pitch.’”

In his next at bat, in the bottom of the ninth, Reimer ripped a deep line drive to right-centre field line off Dennis Eckersley, another Cooperstowner, for a double, as part of the two-run rally that saw the Brewers tie the game.

“I was lucky to get a hit off Eckersley because I know there were other times against him where I watched three pitches go by and I didn’t even swing the bat,” said Reimer. “To have a game like that against such quality pitchers, it makes it all the better now that I look back.”

Growing up in Enderby, B.C., Reimer couldn’t have fathomed that he’d one day smash back-to-back doubles off of Hall of Famers, let alone have six hits in a major league game.

For the record, Reimer was born in Macon, Ga., in 1964, when his father, Gerry was playing professionally for the town’s South Atlantic League’s double-A squad. His dad, who has had a profound influence on him both on and off the field, played 11 seasons in the minor pro ranks, advancing as high at triple-A.

Largely through his father’s tutelage, Reimer became one of the best hitting prospects ever to emerge from north of the border. The younger Reimer was part of the Canadian national team on multiple occasions, including at the 1983 Pan Am Games and 1984 Olympics.

“I’ve always been proud to wave my flag as a Canadian because Baseball Canada did so much for me growing up,” said Reimer. “I always classify myself as Canadian and I always will. Being born in the states was always handy when it came to crossing borders and work visas and stuff like that, but I’m always totally proud of being Canadian.”

After tenures at Orange Coast Junior College and California State University (Fullerton), he was selected by the Texas Rangers in the 11th round of the 1985 draft. 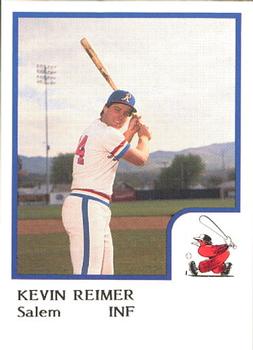 He’d spend parts of four seasons in the minors, before making his big league debut with the Rangers on September 4, 1988. Reimer ranks starting the Rangers’ home opener in 1991 against the Brewers as one of his career highlights.

“President Bush was the owner so Desert Storm was a hot thing and they had jets fly over, it was so cool,” recalled Reimer. “I was in the Opening Day lineup and Nolan Ryan was pitching and in my first at bat, I hit a home run. I’ll never forget that.”

That homer was a harbinger of things to come for Reimer that season. He’d club 20 home runs in total to become just the fourth Canadian (joining George Selkirk, Jeff Heath and Pete Ward) to belt 20 home runs in a big league campaign. 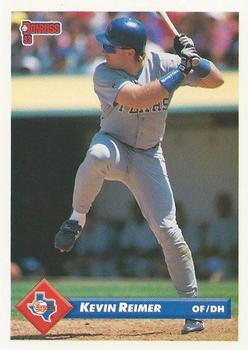 Following the 1992 season, Reimer was selected ninth in the expansion draft by the Colorado Rockies. The Rockies immediately flipped him to the Brewers for Dante Bichette. Reimer has the misfortune of replacing future Hall of Famer Paul Molitor, who had signed with the Toronto Blue Jays, as the Brewers’ primary DH. It was a lot of pressure and really a no-win situation for the-then 29-year-old who finished the season with a respectable 13 home runs and 60 RBI.

That off-season, Reimer opted to sign with the Fukuoka Daiei Hawks of the Japanese Pacific League and proceeded to hit .297 and sock 26 homers for them in 1994. He spent one more season in Japan before signing a minor league deal with the Minnesota Twins. He’d play parts of two more seasons in the Twins’ and Mariners’ organizations and he was hitting .345 for Mariners’ triple-A Tacoma Rainiers in June 1997 when he retired. At the time, he was disillusioned with the sport and that feeling continued when he returned to B.C.

But those feelings have since subsided and he has started watching games again.

“It’s kind of fun seeing that a lot of my former teammates are now coaches and managers,” said Reimer. “That keeps me interested.”

These days Reimer resides in Enderby, B.C., where he runs a part-time taxidermy business and is a full-time husband to his wife, Christine, and father to his daughters, Shelby and Tea. He’s not one to brag about his accomplishments, but he does rank his six-hit game as one of his career highlights.

“It was one of those days where the mentality was, ‘Wow, I’m going to pick up some points on my batting average,’ and then in same breath, I was like, ‘Geez, I still need a heckuva a lot more to make my batting average respectable,’’’ said Reimer with a chuckle.