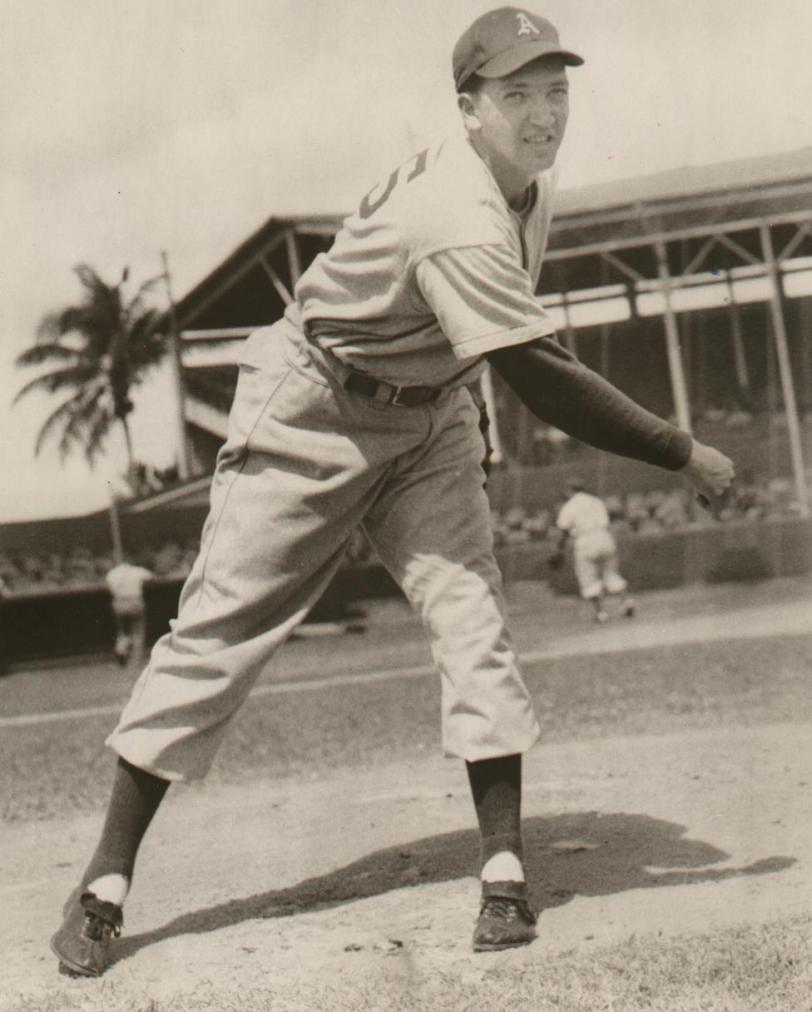 No one could’ve predicted that Toronto-born right-hander Dick Fowler would make history on September 9, 1945.

Just eight days earlier, the 6-foot-4 hurler had returned from a three-year term in the Canadian army and in three ensuing relief appearances, he had been lit up for 11 runs in 11-2/3 innings.

“I came out of the Canadian army and I was hog fat, at least 35 pounds overweight,” Fowler would tell a reporter in 1947.* “I can honestly say I was never in worse shape in my life.”

But Connie Mack’s bottom-dwelling Philadelphia A’s needed a starting pitcher for the second game of a doubleheader against the St. Louis Browns that day, and Fowler, anxious to re-establish himself as a starter, gladly accepted the assignment.

Led by shortstop Vern Stephens and first baseman Lou Finney, the Browns were a formidable opponent. They had won the American League pennant the previous season and had 25 more wins than the A’s heading into this contest. With that said, the Browns had dropped five in a row, including the first game of that day’s twin bill.

Given Fowler’s poor conditioning and the fact that he had not made a big league start since September 19, 1942, there were questions about the Canuck righty’s stamina. Could he pitch deep into the game?

But armed with an arsenal that included an 87-mph fastball, a nasty curve and a middling change-up, Fowler took the mound in front of 16,755 fans on a dreary, overcast day at Shibe Park and dominated. In nine innings, Fowler held the Browns without a hit, while walking four and striking out six.

“I threw every pitch that [catcher] Buddy Rosar called,” Fowler told reporters after the game. “I had been away for three years and I figured he knew the hitters better than I did.”

The only time he was concerned about losing his no-hitter was in the ninth inning when Finney belted a long fly ball down the right field line that went foul. Fowler settled down to get Finney to ground into a double play.

But even after tossing nine, hitless innings, Fowler wasn’t guaranteed a victory. Browns pitcher Ox Miller was almost equally as effective, holding the A’s off the scoreboard and to just three hits through eight innings. But in the bottom of the ninth, A’s right fielder Hal Peck tripled to the right-centre field and second baseman Irv Hall followed with a single up the middle to score Peck and secure a 1-0 win. After Peck touched home plate, the A’s mobbed Fowler.

“Dick had a dazed look on his face and a big goofy grin,” recalled Phil Marchildon in his 1993 biography, Ace. “A group of us went out and celebrated with a few beers at a local tavern.”

But before he did that, Fowler snuck away from his teammates and called his wife, Joyce, who was staying with relatives in Toronto to share the news.

Fowler’s no-hitter was the first by an American League pitcher since Bob Feller held the Chicago White Sox hitless on April 16, 1940. It was also the first no-no by an A’s pitcher since Joe Bush on August 26, 1916.

After hanging up his playing spikes, Fowler settled in Oneonta, N.Y. – his wife’s hometown – where he worked in a department store and later as the night clerk at the Oneonta Community Hotel. He also coached one of the town’s first Little League teams. Sadly, Fowler was diagnosed with both kidney and liver disease in 1972 and he passed away on May 12 of that same year when he was just 51 years old. He was inducted into the Canadian Baseball Hall of Fame posthumously in 1985.

*This quote is included in Phil Marchildon’s biography, Ace.