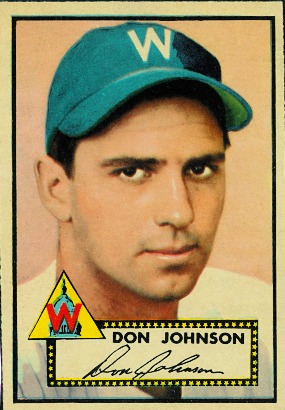 Don Johnson, who pitched parts of five minor league seasons with the International League’s Toronto Maple Leafs in the 1950s, died of kidney failure in Portland, Ore., on February 10 at the age of 88.

Though his wild and hard-drinking ways sometimes overshadowed his on-the-field performance, Johnson managed to pitch in parts of seven big league seasons, including on the New York Yankees’ World-Series-winning teams in 1947 and 1950. But the 6-foot-3 right-hander experienced his greatest mound success in Toronto.

“I’m not going to lie. I had a lot of trouble with liquor when I was playing ball,” he told author Steve Bitker in the 2003 book, The Original San Francisco Giants: The Giants of ’58. “Teams would keep giving me a chance and I’d go back and forth with it. Jack Kent Cooke owned the Toronto team and paid us well, and every time I won a game I’d get money under the table. San Francisco bought me, but I wish they’d have left me in Toronto. I really loved that town.”

But it wasn’t all roses for Johnson in Toronto. In spring training one season, he flipped his car and was charged with impaired driving.

“They threw me in jail in Vero Beach, Florida,” Johnson told Nick Diunte in the 2013 book, Bridging Two Dynasties: The 1947 New York Yankees. “I was in jail for six days with three murderers. They took good care of me. They put me on the chain gang with the snakes, cutting grass. Cooke told me to stay there until I changed my life and sobered up.”

Unfortunately, Johnson didn’t change after Cooke bailed him out and the Maple Leafs ace became less reliable. He reportedly disappeared from the Leafs without explanation four times during the 1956 and 1957 seasons and Cooke sold Johnson to the San Francisco Giants in 1958.

Born in Portland in 1926, Johnson was the only child of Swedish immigrants, Gus and Judith Johnson. As a teenager, Johnson excelled as a pitcher in high school and in American League ball.

“I threw hard, I could fire that ball. I played high school ball and pitched six no-hitters in high school and American League ball. That’s where Joe Devine, the Yankees scout, along with five or six others, came after me,” Johnson told Diunte.

In 1943, the then 16-year-old righty inked a contract with the Bronx Bombers that included a $10,000 signing bonus. The promising fireballer split the 1944 season between Yankees’ Double-A affiliates in Kansas City and Newark, before serving a two-year stint in the U.S. army. Upon his return, he cracked the Yankees roster in 1947 and struck up a friendship with Joe DiMaggio.

“I was no superstar, but I played with the best players who ever lived,” Johnson told New York Times reporter Joe Lapointe in July 2010. “Joe DiMaggio liked me. He took me under his wing. He said, ‘Stay off the booze and away from the broads.'”

“Hell no,” the then-83-year-old Johnson responded.

After registering complete-game victories in his first two starts with the Bombers, Johnson pitched sporadically the rest of the 1947 campaign. He attributed this to his refusal to adopt a change to his delivery suggested by Yankees coach Charlie Dressen.

“Charlie Dressen went and said, ‘Don, you’re lifting you leg too high.’ I said, ‘Stick it, man! I’ve got four wins.’ I didn’t pitch much after that,” Johnson told Diunte. “If you talk back to some of these big shots, you don’t pitch anymore, that’s it.”

Johnson didn’t pitch in the Fall Classic that year, but he did receive a World Series ring. However, he said in multiple interviews that he pawned that ring the following year to pay for repairs to the engine of his 1941 Buick when it broke down in Wyoming.

He spent the 1948 and 1949 seasons in the minors, prior to resurfacing briefly with the Yankees for eight games in 1950. On June 15 that same year, he was dealt to the St. Louis Browns. From there, he became a journeyman reliever/spot starter who would toe the rubber for six different teams (He also pitched for the Washington Senators, Baltimore Orioles, Chicago White Sox and Giants) over parts of seven big league seasons. 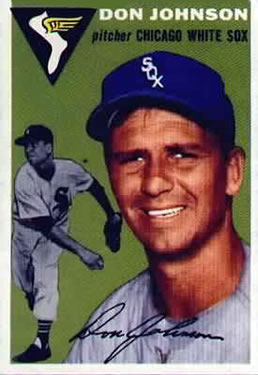 His final professional pitching gig came with his hometown Triple-A Portland Beavers in 1960.

After hanging up his spikes, Johnson became a cab driver in Portland and his life didn’t become any less wild. In 1967, he was robbed and shot in the head for $19 in fares.

“Two people saw laying there and thought I was drunk,” Johnson told the New York Times in 2010 of the incident. “I saw angels playing harps. I said, ‘I’m gone.’ A doctor stopped the bleeding. They caught the guy.”

Johnson told Diunte that he was held up again the first day he returned to his cab after his recovery.

“A week later I got hit over the head with a wine bottle from a (drunk) and I said it was time to quit,” he said.

Johnson later worked in the Parks Department in Portland and reportedly quit drinking in 1990.

In 2006, Johnson was also inducted into the Portland Interscholastic Hall of Fame and four years later, he was honoured on Old-Timer’s Day at Yankee Stadium when the team celebrated the 60th anniversary of the 1950 World Series-winning squad.

Johnson had experienced some health issues in recent years; both of his hips had been replaced and he had battled a blot clot in his upper leg.

“I always like to talk baseball,” Johnson told the New York Times in 2010. “What a life, what a great life. It’s been a comedy of errors, but I’m still hanging in there. The years sure went by fast. They whipped by. I had fun. Not too many people can say they walked into Yankee Stadium and put a uniform on.”

Johnson is survived by his wife, Karen, sons Steve and Don Jr., daughter Lori, a grandson and a granddaughter. You can leave online condolences here.