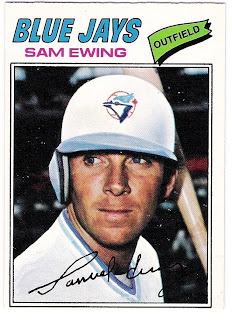 Canadian Baseball Card of the Week: 1977 O-Pee-Chee Sam Ewing. This six-foot-three, Tennessee native was the hero of the Toronto Blue Jays’ first spring training game, which was played on March 11, 1977.

Most longtime Toronto Blue Jays fans can recall that their beloved Blue Birds defeated the Chicago White Sox 9-5 in snowy conditions at Exhibition Stadium on April 7, 1977 in their first regular season game, but how did the team fare in its first spring training contest?

Yesterday, I decided to do some digging to find out. Here’s what I discovered:

– On March 11, 1977, the Blue Jays defeated the New York Mets 3-1 in front of a capacity crowd of 1,988 fans at Grant Field in Dunedin. The Jays still play in the same location in Dunedin, but the seating capacity of the stadium – which is now called Florida Auto Exchange Stadium – has been expanded to 5,509.

– While Canadian music legend Anne Murray was selected to sing the national anthem at the Jays’ regular season opener in Toronto in 1977, their club’s choice for their spring training debut was considerably less famous. The Dunedin High School band serenaded the enthusiastic, largely Canadian crowd with the anthem. The Toronto Star’s Neil MacCarl reported that Canadians in attendance sang the anthem “so lustily they forced the Dunedin High School Band to pick up the pace.”

– Veteran right-hander Bill Singer, who also started the regular season opener, was the first to throw a pitch for the Blue Jays in their spring debut. Future Blue Jay Lee Mazzilli greeted Singer by hitting his third pitch over the right-field wall. That homer, however, would be all of the offence the Mets could muster that day.

– According to the Toronto Star box score, Bob Bailor, the starting shortstop, was the first Blue Jay to bat in their first spring training game.

– After being shutout by veteran left-hander Jerry Koosman for three innings, the Jays scored their first run off of six-foot-two, Tulsa, Okla., native Jackson Todd in the bottom of the fifth. The right-handed throwing Todd later pitched for Toronto from 1979 to 1981.

– With the game tied 1-1 in the bottom of the eighth, DH Sam Ewing, a six-foot-three Tennessee native, socked a two-run double to left-centre field off of Mets rookie Dwight Bernard to score shortstop Jim Mason and Ron Fairly to put the Jays ahead 3-1.

– Thirty-four-year-old right-hander Chuck Hartenstein, who hadn’t pitched in a big league game since 1970, recorded the final three outs for the Jays to record the save in a game that was played in one hour and 57 minutes.

– Vancouver native Dave McKay was the starting third baseman for the Blue Jays in their spring training opener and in their first regular season game, making him the first Canadian to suit up for the Jays.

– But McKay was not the only Canadian on the field in Dunedin that day. London, Ont., native Tom Burgess, who played in the big leagues with the St. Louis Cardinals and Los Angeles Angels, was coaching third base for the New York Mets. Both McKay and Burgess have since been inducted into the Canadian Baseball Hall of Fame.

– If you haven’t already done so, please “LIKE” the Cooperstowners in Canada Facebook page. I update this page with links to Canadian baseball stories regularly. Thanks for all your support.

13 thoughts on “But What Do I Know? … Special Edition: Toronto Blue Jays’ first-ever spring training game”