When I worked at the Canadian Baseball Hall of Fame in St. Marys in 2008 and 2009, I found myself fascinated with a 1954 Montreal Royals team photo.

From 1939 to 1960, the Royals were the Triple-A farm team of the Brooklyn Dodgers, so baseball immortals like Jackie Robinson, Duke Snider, Roy Campanella and Don Drysdale all honed their skills at Montreal’s Delorimier Stadium before starring at Ebbets Field.

My initial interest in the photo was spurred by the fact that Roberto Clemente (bottom row, far left) was on this team, and this remains the only photo I’ve seen of the Puerto Rican legend with the Royals.

The story of Clemente’s 1954 campaign (told below) is an engrossing one, but as I looked at this photo more frequently, I began wondering about the rest of these mostly forgotten men smiling back at me.

The 1954 squad was far from the most successful team in Royals history. Aided by the hitting heroics of Sandy Amoros (.352 in 68 games) and the mound prowess of Tommy Lasorda (14 wins) – both of whom were recalled by the Dodgers and aren’t in this photo – the 1954 Royals won 88 games and finished second to the Toronto Maple Leafs in the International League.

But with former Montreal pitcher, Max Macon, who had replaced Walter Alston, as manager, the Royals enjoyed an inspired playoff run that saw them fall one victory short of a league championship.

When I returned to the Canadian ball shrine in St. Marys for a visit this summer, I found this photo again and my curiosity was rekindled. Just who were these men who spent a summer in Montreal 58 years ago?

Well, I’ve decided to find out.

Starting with today’s entry about Roberto Clemente, my goal to write an article about each man in this photo. It’s an ambitious project that will take several months, but I’m up for the challenge.

I hope you’ll enjoy reading about these men as well. 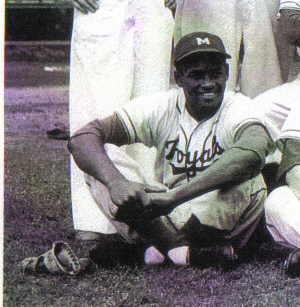 The following has been adapted from an article I wrote in 2002.

When historians talk about legends that are part of Canadian baseball history, they often mention Babe Ruth (hit his first home run in professional baseball in Toronto) or Jackie Robinson (played in Montreal before breaking Major League Baseball’s colour barrier).  Seldom do they allude to a fearless Puerto Rican player who honed his skills in Montreal before becoming a major league superstar.

Remembered by most as a dynamic outfielder with the Pittsburgh Pirates, Roberto Clemente was a man whose on-the-field brilliance was matched only by his humanitarian efforts off of it. His tragic death in a plane crash while attempting to deliver relief supplies to Nicaragua on December 31, 1972 is still mourned.

And while Clemente is revered in Latin America and the U.S., Canada has not embraced him as an adopted son – this, despite the fact that, before attaining baseball immortality, he spent a season in Canada battling for playing time.

Signed to a $15,000 contract by the Brooklyn Dodgers in 1954, Clemente was assigned to their International League affiliate Montreal Royals. With a rule in place that stipulated that any team signing a rookie to a contract over $4,000 must keep that player on their major league roster for the season or risk losing him in an off-season draft, sending the talented youngster to the minors was a gamble.

Clemente’s season with the Royals wasn’t particularly memorable. Despite being one of the Dodgers’ best prospects, the slender outfielder was sent to the plate only 148 times in a 154-game season.

His lack of playing time was puzzling – a trend that began in the Royals’ home opener, when after registering three hits in four at bats, he found himself on the bench for the next game. Even hitting a monstrous home run that cleared the left field wall and went right out of Delorimier Stadium (the first player to accomplish this) wasn’t enough to earn him a regular spot in the lineup.

So why did the Dodgers refuse to play their premier prospect on a consistent basis? The most popular explanation is that they feared losing him in the off-season draft and they didn’t want other teams to see how good he was.

“The evidence seems to indicate that the Dodgers were trying to hide him,” said Bruce Markusen, author of “The Great One,” an excellent book about Clemente. “I mean if you have a young player with that much talent and you’re trying to develop him, you don’t limit him to 148 at bats.”

In his book, Markusen also notes that during Clemente’s tenure with the Royals, the future Pirates star often took batting practice with the pitchers and would typically only play the second game of a double-header (most scouts from visiting teams would leave after the first game). These tactics seemed to support the theory that he was being hidden.

On-the-field frustrations aside, Clemente seemed to enjoy living in Montreal, noted Markusen. The city offered the Latin outfielder refuge from the overt racism he encountered when he played in International League cities like Richmond.

“From everything I’ve read, he was generally treated well in Montreal,” said Markusen. “I’ve read reports where he has said that the family (a white French family) he stayed with was very good to him.”

But the cultural solace Montreal provided was little consolation for the highly motivated Puerto Rican. Driven to become a major league player, Clemente grew disenchanted as the season wore on. Fortunately, his luck would change when Branch Rickey, general manager of the last-place Pittsburgh Pirates, dispatched scout Clyde Sukeforth to check out Royals pitcher Joe Black. Legend has it that the veteran scout grew so enamored with Clemente that he never did see Black pitch. Before the end of his trip, Sukeforth was convinced that the skilled outfielder should be the Pirates’ number one pick in the off-season draft.

“It could be said that the course of Clemente’s career changed that year in Montreal,” said Markusen.

Claiming a starting position in the Pirates’ outfield in 1955, Clemente would become a fixture in the team’s lineup for 18 seasons. In his career, he was selected to 15 all-star teams, won four batting titles and registered exactly 3,000 career hits. He was also a member of two World Championship-winning teams (1960, 1971).

While Clemente was proud of his baseball accomplishments, his humanitarian work off the field was equally important to him. In the off-season, Clemente would return to Puerto Rico to hold baseball camps for underprivileged children. And in 1971, he announced plans to build the Roberto Clemente Sports City, a facility that provides less fortunate children with instruction in different recreational activities that still operates in his hometown of Carolina today.

Clemente was also an outspoken leader for Latin players – using every opportunity he had to enlighten Major League Baseball and its fans about the racism and language barriers that Latin players had to overcome. Markusen writes that when Clemente started playing in 1955, there were only five other Puerto Rican players in the majors and 29 Latin players in total.

“He deserves a great deal of credit for the increase in the number of Latin players in the majors today,” said Markusen. “There has been a full generation since his passing and he is still very highly regarded in the Latin community.”

So while Latin America and Clemente’s U.S. fans regularly reflect on his life, perhaps Canadians should pause and remember this baseball legend as well. His stay in our country may have been brief, but his impact is still being felt. And although he’s not talked about as much as Ruth or Robinson, he’s very much a part of our baseball history.